Data Center and Mobile demand is expected to grow

Samsung has just announced its plans to create a new NAND flash facility to help meet the needs of tomorrow's SSD market. This new facility will be placed in Samsung's site at Pyeongtaek, Korea and will be used to create the company's latest 3D V-NAND chips.

The construction of this new facility started this May, and Samsung expects this facility to be ready for mass production in the second half of 2021. This NAND will help fuel the next generation of connected devices and the race to bring artificial intelligence to more devices. With 5G entertain the mainstream market, Samsung sees the demand for NAND increasing in the coming years, especially as data centers and internet infrastructure is updated to meet the needs of the next generation of mobile devices.

Later this year, all major consoles will have moved to flash-based storage, with the Nintendo Switch already relying on NAND flash while the PS5 and Xbox Series X will rely on ultra-fast NVMe SSDs as their primary storage mediums. These factors and more will demand more NAND production for suppliers like Samsung, and Samsung needs to be ready for when that time comes.

Over time, Samsung's NAND technology has grown to become more storage dense and more performance thanks to the company's commitment to creating its high-performance 3D V-NAND memory. Even now, Samsung is one of the most well-renowned creators of consumer SSDs when it comes to performance and reliability.

This increase in NAND supply will also help NAND pricing to remain at reasonable levels, and allow Samsung to maintain market share as demand grows. With China's home-grown NAND suppliers entering the global market, Samsung will need to work hard to limit their potential growth by meeting market demand. 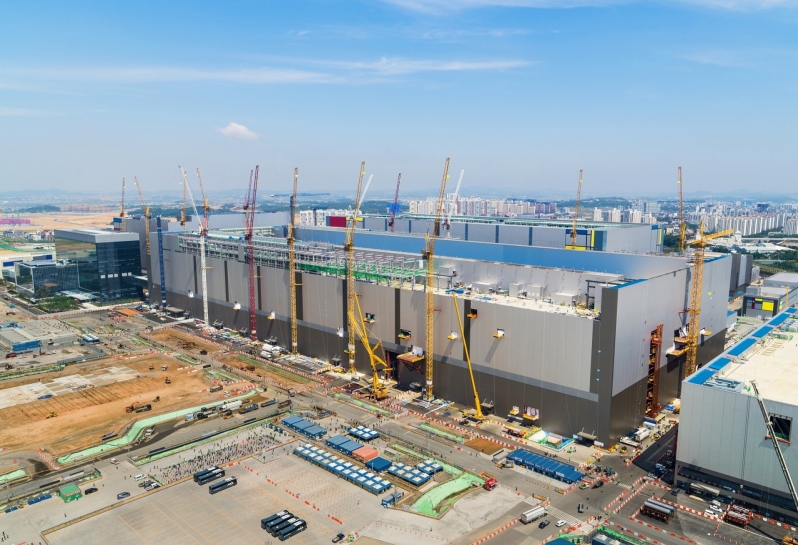 You can join the discussion on Samsung's plans to create another NAND production facility on the OC3D Forums.

dazbobaby
Does this mean cheaper larger SSD's? I hope so.

Dawelio
Haha, the money these companies have are insane... And the fact that just in that picture, that are literally 17 (!) erecting towers are just insane.Quote

NeverBackDown
Quote:
And to think it's really not all that much if you take it into context. That's the crazy partQuote

Warchild
Quote:
Just look at the size of the building, at how it compares to the vehicles. Norway doesnt have any buildings this size. Its insane, yet nothing special to Samsung.Quote
Reply