Samsung reveals a 4TB 860 Pro series SSD on their website

This drive will be faster than the 850 Pro

Samsung reveals a 4TB 860 Pro series SSD on their website

It looks like Samsung has accidentally revealed their upcoming 860 Pro series of SSDs, a new model of SATA SSDs that will offer capacities of up to 4TB while also delivering more performance than the company's existing 850 Pro series of SSDs.

While the main webpage and full specifications for Samsung's 860 Pro series remain unavailable, the drives are known to have sequential read speeds of up to 560 MB/s and sequential write speeds of up to 530MB/s, increases of 10MB/s over their existing 850 Pro series SSDs. At this time it is unknown how much the random I/O performance of these drives have changed, though it is expected to have increased. 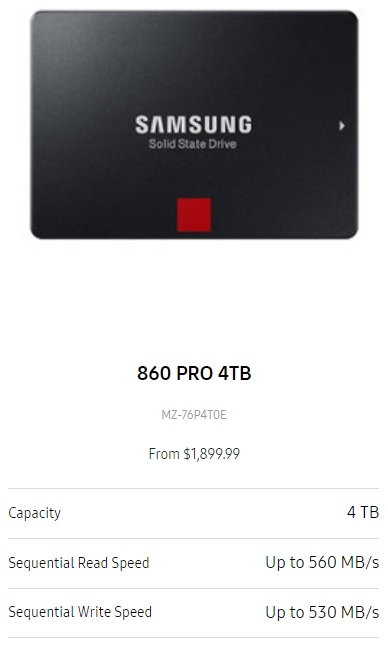 Only the 4TB version of this SSD has been listed, releasing with a listed pricepoint of $1,899.99. At this time the release date of Samsung's 860 series SSDs is unknown.

You can join the discussion on Samsung's upcoming 860 Pro series of SSDs on the OC3D Forums.