Samsung has today announced its first PCIe 4.0 SSDs, which are designed explicitly for AMD's latest EPYC 7002 series of processors. As you should know, AMD launched its 2nd Generation of EPYC series processors this week, and with that, PCIe 4.0 support has been brought into the server market, offering more bandwidth and I/O options for server providers.

With their PM1733 series of SSDs, Samsung promises to deliver read speeds of 8.0GBps and random Read IOPS of 1500K, outpacing every other SSD on the market. Sadly, Samsung hasn't confirmed the write performance of its PCIe 4.0 SSDs. This suggests that this drive is read focused and offers lower write speeds.

By using the company's 5th generation 512Gb TLC V-NAND, Samsung will offer customers PM1733 series SSDs with up to 30.72GB of SSD storage in a U.2 form factor (PCIe Gen4 x4) and up to 15.36 TB of storage on the HHHL (PCIe Gen4 x8) form factor. The 8x PCIe lanes in the HHHL card is likely to enable most of the drive's performance to be accessed via PCIe Gen3. 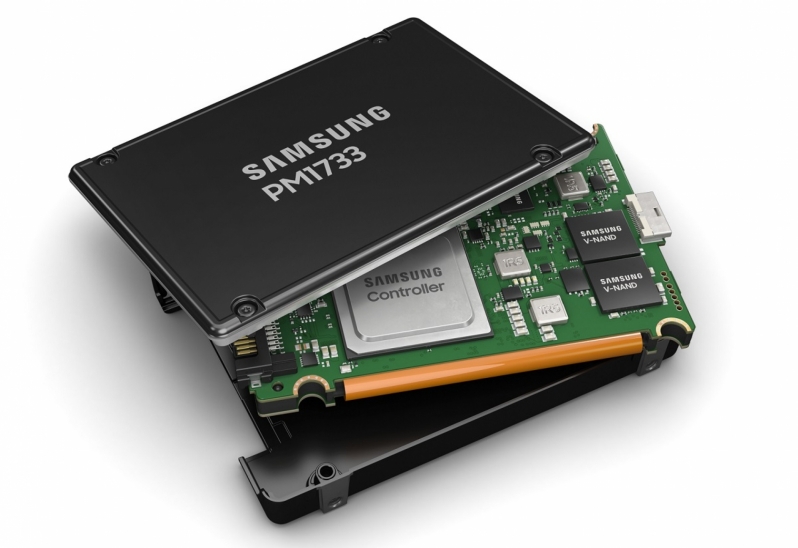 Samsung plans to ship its PM1733 series of SSDs this quarter to enterprise customers. At this time, Samsung has not disclosed the pricing of its PCIe 4.0 devices. So far, Samsung has not revealed when they plan to release PCIe 4.0 enabled consumer SSDs.

You can join the discussion on Samsung's PCIe 4.0 8GBps SSDs on the OC3D Forums.

robbiec
Plot is getting interesting for EPYC platform all of a sudden. I'm using 4 x the previous gen Samsung on EPYC and getting about 7GBs/4GBs in RAID1 (R/W) for a DB solution I have. Nice improvement. Iirc it was a out 15K for the 30TB unit 18 months ago.Quote