"With the introduction of our 3rd generation V-NAND flash memory to the global market, we can now provide the best advanced memory solutions, with even higher efficiency based on improved performance, power utilization and manufacturing productivity, thereby accelerating growth of the high-performance and the high-density SSD markets," said Young-Hyun Jun, President of the Memory Business at Samsung Electronics. "By making full use of Samsung V-NAND's excellent features, we will expand our premium-level business in the enterprise and data center market segments, as well as in the consumer market, while continuing to strengthen our strategic SSD focus." 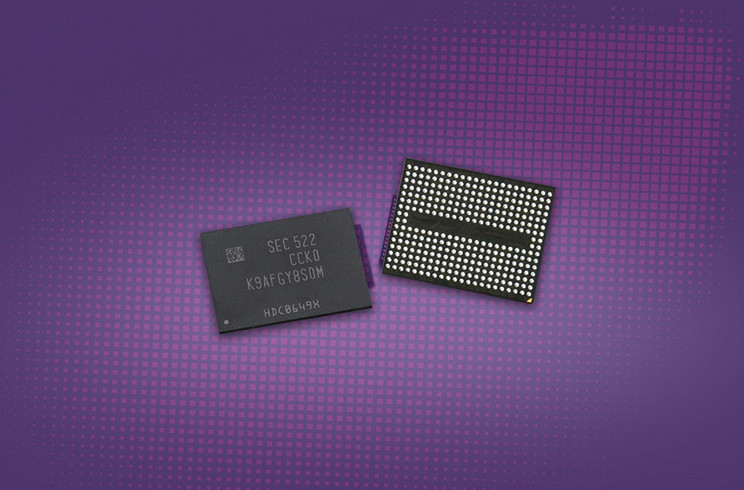 In the new V-NAND chip, each cell utilizes the same 3D Charge Trap Flash (CTF) structure in which the cell arrays are stacked vertically to form a 48-storied mass that is electrically connected through some 1.8 billion channel holes punching through the arrays thanks to a special etching technology. In total, each chip contains over 85.3 billion cells. They each can store 3 bits of data, resulting 256 billion bits of data, in other words, 256 Gb on a chip no larger than the tip of a finger.

Samsung plans to produce 3rd generation V-NAND throughout the remainder of 2015, to enable more accelerated adoption of terabyte-level SSDs. While now introducing SSDs with densities of two terabytes and above for consumers, Samsung also plans to increase its high-density SSD sales for the enterprise and data center storage markets with leading-edge PCIe NVMe and SAS interfaces.

SSDs are set to have a revolution in terms of capacity, pricing and in productivity. 3D vNAND fixes many of the issues which traditional single layer flash posses, increasing write speeds, reliability and  decreasing power usage.

With Samsung, Intel/Micron and other NAND manufacturers jumping on 3D tech we can expect to see larger capacity, faster SSDs become available relatively soon, bringing with them much better cost/GB than ever seen before in SSDs.

You can join the discussion on Samsung's 32GB/256Gb 3D NAND on the OC3D Forums.

Tripp
Yes please I will have 2Quote

WYP
Quote:
*pushes Tripp out of the que*

Tripp
Quote:
Hahaha :'). This should push pricing down again, hopefully next time I build a rig it will be all SSD'sQuote

WillSK
Quote:
Yeah i'm thinking the same. I was gonna go Skylake but after reading the threads recently i think KabyLake will be my next build

gonna go for a beastly MATX system with all SSDs!!!Quote