Sabrent's 8TB M.2 SSD is enough to store all the games you need

Shame this SSD won't be affordable

Sabrent's 8TB M.2 SSD is enough to store all the games you need

Sabrent may be a lesser-known brand in the SSD market, but that's not stopping them from delivering customers a wide range of high-performance drives at reasonable prices.

Now, Sabrent is tacking the capacity problem which faces many SSD users, merging NVMe performance with Micron's QLC NAND to create a new 8TB offering within their Rocket Q range.

This new Sabrent Rocket Q series M.2 SSD will utilise a PCIe 3.0 x4 interface and deliver expected sequential read/write speeds of 3,400MB/s and 3,000MB/s respectively. These specifications come from Sabrent's 4TB existing model, as the full specifications for Sabrent's 8TB driver are yet to be released.

While this SSD will be well suited to game storage, especially now that 100+ GB AAA games aren't uncommon, gamers shouldn't expect these SSD drives to be affordable. Amazon UK currently lists Sabrent's 4TB M.2 SSD with a price tag of £669.99, and Sabrent's website has listed the drive's US pricing at $759.99.

While the pricing of Sabrent's 8TB SSD is likely to exceed £1000, is nonetheless incredible how much storage Sabrent has managed to place within its latest Rocket Q drive. M.2 SSDs are tiny, and 8TB is a lot of space to fill. For most consumers, those looking for 8TB of system storage will likely need to look at mechanical storage solutions, which will often cost less than £200 at retail. 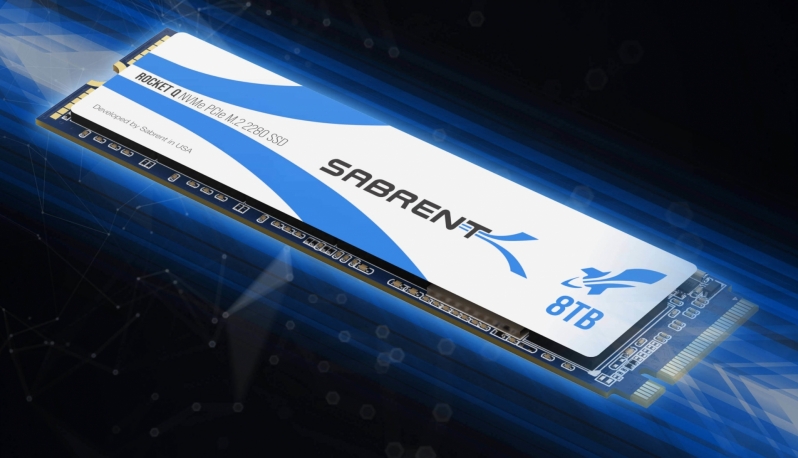 You can join the discussion on Sabrent's 8TB Rocket Q M.2 SSD on the OC3D Forums.

Digikid
"Sabrent's 8TB M.2 SSD is enough to store all the games you need"

WYP
Quote:
IDK man, do you really "need" more than 8TB of games installed at once? There's a reason why I didn't use the word "want".Quote

Wraith
Quote:
Agreed! I had to get an additional 1 TB SSD as the 6 TB I have are already full.. I'm fast filling this too.Quote

Avet
This is quite useful for Video editing. Prores 422 HQ 4K is about 800 GB/h. If you have a few lengthy projects, or you are using beefier codec this is a savior.

And for the games... CMON... I have 500 GB SSD and I can't get it filled. It already has 120-ish GB used by MMOs. If it is 30 mins away by download there is no need to waste space because you might get an itch to play some game some time.Quote
Reply