The next-generation of PCIe 4.0 is coming!

Phison's E16 controller was only the start of the company's march into PCIe 4.0, an opening act into what will grow into a more substantial market. At the Flash Memory Summit, Phison branded itself as "your PCIe Gen4 SSD Leader", confirming their plans to continue pushing SSD performance forward. With this, they revealed their next-generation PS5018-E18 controller.

To do this, Phison has moved from TSMC's 28nm lithography to the company's newer 12nm manufacturing process, upped their controller power consumption to a maximum of around 3W and have packed into their silicon three 32-bit ARM Cortex R5 processors instead of two. The Speed of each memory channel has also been increased from 800 MT/s to 1200MT/s, enabling much of the controller's speed increase.

This new controller will also support a DDR4/LPDDR4 cache and will be able to support TLC and QLC NAND. Phison will also jump to the NVMe 1.4 protocol with this controller.

In basic terms, Phison hopes to move close to the limits of PCIe 4.0 with their next-generation PS5018-E18 controller, support a maximum of eight memory channels and up to 8TB of memory.

Below are the specifications of Phison's existing PS5016-E16 SSD controller. These impressive speeds will look slow when compared to Phison's next-generation offerings. 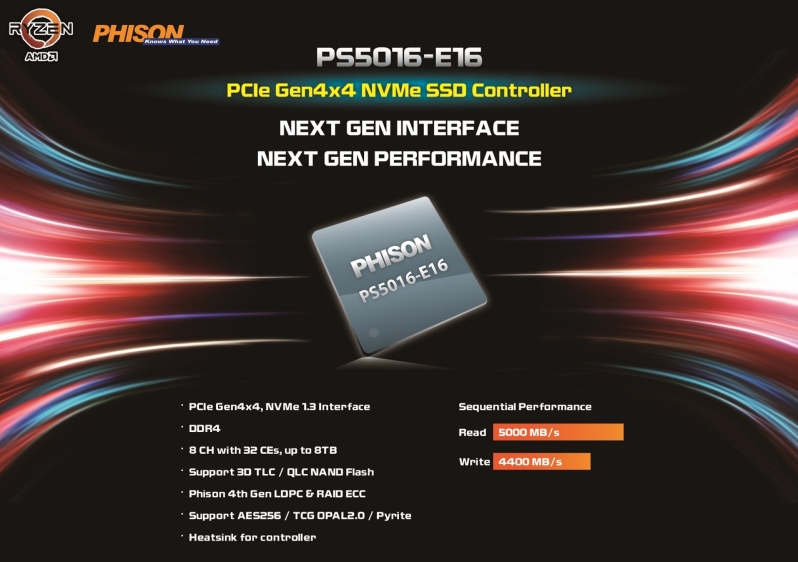 At the Flash Memory Summit, Phison has confirmed that their new PS5018-E18 controller will become available in Q2 2020.

You can join the discussion on Phison's next-generation PVie 4.0 SSD controller on the OC3D Forums.