Phison is currently one of the biggest names in the SSD business, with their controllers powering SSDs from Corsair, Sabrent, Gigabyte, MSI, Patriot, Seagate and more. PCIe 4.0 SSDs are currently the fastest available, but the world is preparing to transition to PCIe 5.0 connectivity, giving future SSDs a potential 2x speed bump.

Phison has confirmed that its PCIe 5.0 E26 SSD has been taped out on an advanced 12nm lithography process and that SSD solutions are due to be released in the second half of 2022 using this controller. Firmware is currently being developed within an FPGA environment for their E26 PCIe 5.0 SSD controller, and Phison plans to provide PCIe 5.0 SSD samples to motherboard manufacturers soon.

In their press release, Phison has stated that they use more of their own intellectual property than competing SSD controller manufacturers, eliminating many dependencies on external companies and inconsistencies when 1st party and 3rd party IP interact. Phison's pre-tape out firmware creation on FPGA also gives Phoson a head start over their competitors, ensuring a faster time to market.

Phison's E26 SSDs are expected to ship within the M.2, U.3, E1.S, and E3.S form factors, supports the fastest NAND using the ONFI 5.x and Toggle 5.x interfaces and support platform features like PCIe Dual Port, SR-IOV, and ZNS. At this time, Phison has not released any official speed estimates for their planned PCIe 5.0 SSDs, though it is worth noting that the performance of these SSDs will be defined by the NAND (NAND speed matters) they use and Phoson's E26 controller and firmware.

What follows is Phison's Press Release regarding their PCIe 5.0 SSD plans. 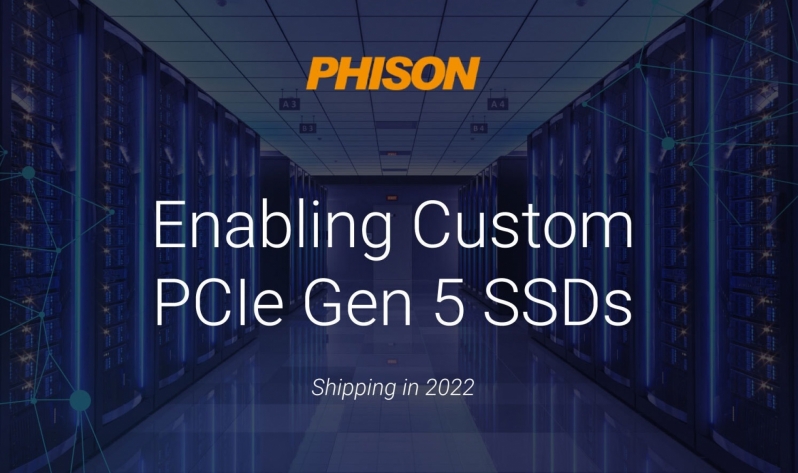 Phison Electronics Corp., a global leader in NAND flash controller integrated circuits and storage solutions, today announced its technology development of PCIe Gen 5 customizable SSD solutions for Enterprise and Client SSDs. Phison customers from Hyperscale Cloud Data Centers to PC Gaming demand the fastest performance motherboards and SSD storage devices. Their business models require that they transition to the newest technologies when they first become available, usually well before the rest of the software and hardware ecosystem has been established.

Phison is enabling our valued customers with PCIe Gen 5 SSD platforms that may be customized to perform optimally in their applications. Customers who are early adopters of PCIe Gen 5 SSDs will benefit from superior specifications and first to market leadership revenue. The data rate specification for PCIe Gen 5 at 32 Gb/s is twice the lane speed of PCIe Gen 4 at 16 Gb/s, enabling either double the overall performance, or offering similar performance, but using half as many lanes as PCIe Gen 4.

Phison is actively developing its first PCIe Gen 5 platform named the E26 Series Controller and SSD and has two key differentiating advantages. First, Phison makes more of the critical intellectual property (IP) blocks inside the controller than any other company, thereby eliminating dependencies and inconsistencies that competitors have when they source 3rd party IP for their controllers. Second, that the E26 controller IP is developed concurrently with Phison's firmware in a FPGA environment, even before tape out ensuring a fast time to market with the highest reliability at introduction.

Phison will be providing early E26 Gen 5 SSD samples to industry-leading motherboard manufacturers so their engineers can tune their electrical signal link-ups, command timing, and BIOS to Phison's Gen 5 SSD controllers and firmware. Phison's E26 SSD platform will support PCIe Dual Port, and have advanced features such as SR-IOV and ZNS, and support for the newest, fastest NAND interfaces ONFI 5.x and Toggle 5.x.

"While PCIe Gen 4 SSD shipments are still ramping up, there are many server and storage customers who will want to transition to PCIe Gen 5 as soon as that technology is available," said Jeff Janukowicz, Research Vice President at IDC. "By helping to enable an ecosystem, Phison's customizable E26 SSD is at the forefront of PCIe Gen 5 introductions and will facilitate data center customers looking to benefit from the technology's increased performance."

Phison's E26 SSD solution is designed to be a best-in-class combination of performance at low power using Phison's unique architecture of low power consumption ARM R5 CPUs and an array of super low power but high performance CoXProcessor 2.0 technology. The E26 is a customizable SSD platform that will be available in M.2, U.3, E1.S, and E3.S form factors.

The E26 Gen 5 test chip has been successfully taped out in 12 nm advanced process, and customized SSD solutions are targeted to be shipping in the second half of 2022.

Phison was first in the world to ship a PCIe Gen 4 SSD. By leveraging its deep expertise in controller and firmware design and investing heavily in research and development, it is the company's goal to repeat that success by enabling its customers with PCIe Gen 5 SSDs. Phison partner companies who joined in the launch of PCIe Gen 4 benefited from first to market shipments with first to market revenue. Many of them still maintain market share leadership in their sales channels.

Phison's goal is to provide its customers and partners with industry-leading PCIe Gen 5 SSDs that will enable them to expand revenue, profitability, and market share.

Phison is seeking OEM customer partners who want to join in the success of the PCIe Gen 5 customizable SSD platform launch.

You can join the discussion on Phison's PCIe 5.0 SSD plans on the OC3D Forums.