The world of M.2 NVMe storage may still be relatively new to the PC world, but that doesn't mean that it can't be a limiting factor when it comes to storage performance.

We are quickly approaching a time where PCIe bandwidth will be a limiting factor for storage, with NVMe SSDs quickly approaching the limits of the 4x PCIe 3.0 lanes offered by most of today's motherboards. For SSD makers to continue pushing sequential speeds higher, the industry needs to start moving to PCIe 4.0, a change that AMD plans to make with their Ryzen 3rd Generation processors and their Zen 2 EPYC platform.

Phison is already preparing for the day that PCIe 4.0 is available, preparing a controller that can meet the PCIe 4.0 specification, using 4x lanes of PCIe 4.0 bandwidth to deliver sequential read/write speeds that can exceed 4,000MB/s. These speeds already exceed the theoretical limits of 4x PCIe 3.0 lanes, never mind the limitations of the standard in real-world terms.

Phison's new controller is called the PS5016-E16, which was running using the PCIe 4.0 interface over a PCIe 3.0 x16 to PCIe 4.0 x8 converter, which allowed the SSD to interface with an Intel-based test system using an i7-8700K and an ASUS ROG Strix Z370-F Gaming Motherboard.

The SSD used to for this testing was a custom 2TB demo drive which used BiCS3 TLC NAND, though the controller is said to support both TLC and QLC NAND types. 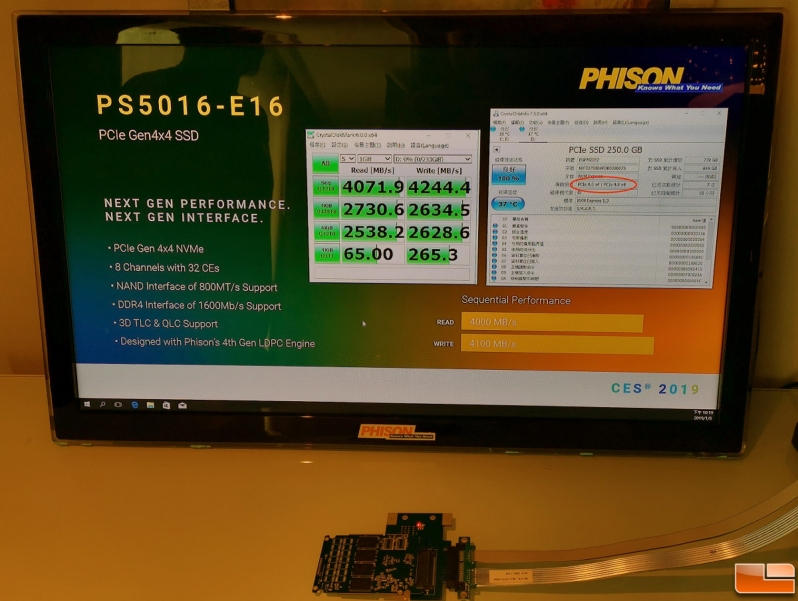 In the future, Phison hopes to accelerate their SSDs by 10% using firmware optimisations and offer a further 10% performance boost by utilising faster BiCS4 NAND, with hopes to achieve performance levels of 4,800MB/s sequential and deliver 900,000 random IOPS.

AMD will be the first CPU manufacturer to market with PCIe 4.0 compliant processors and motherboards, with Ryzen 3rd Generation products releasing in Mid-2019. Phison plans to release their PS5016-E16 controller on Q3 2019, enabling SSD manufacturers to push storage performance to new heights.

You can join the discussion on Phison's PCIe 4.0 PS5016-E16 SSD controller on the OC3D Forums.

NeverBackDown
That is just... insane. Average person won't notice a difference most likely between a 3.0 Nvme vs this.Quote

WYP
Quote:
I'm inclined to agree with this. TBH, if I were to recommend anything to my friends these days it would be to use a BIG SATA SSDs, never mind an NVMe one. As a whole none of them are as enthusiastic about tech as most of forum members, so the difference is not fully appreciated.

That said, those decisions usually are based on bang per buck. Capacity in those cases typically trumps performance, as more games and applications over a slower SSD is often worth more than faster boot times.

One of my friends is finally moving away from an HDD-only system, so I'm sure he will be more than impressed by the boost offered by a normal SATA SSDQuote

AlienALX
Quote:
There's more good to moving away from spinning drives than meets the eye tbh. I removed all of mine and didn't realise how much noise and vibration they generate. Especially when you have six all humming along. It's deathly silent now. Like, other than the very gentle whoosh of the fans that is literally it, and you really have to listen to those fans to know they are even there.

The downside of course? SSDs give no warnings when they are about to die, so make sure you have a backup solution either on hand (USB 3 RAID) or a NAS or something.Quote

WYP
Quote:
The maximum limit of PCIe 3.0 over x4 lanes is 3.94 GB/s. The sequential reads/writes here beat that.