PCIe 4.0 SSDs are now available to order in the UK

Do you want to be the first to jump on the PCIe 4.0 bandwagon?

PCIe 4.0 SSDs are now available to order in the UK

AMD's X570 platform is coming and with it comes PCIe 4.0, delivering never before seen read/write speeds from M.2 NVMe SSDs thanks to the raw bandwidth that's offered by the latest PCI-SIG standard.

Starting today, PCIe 4.0 SSDs are available to order within the UK, ushering forth a new era of SSD performance, with Corsair and Gigabyte leading the charge with their Force MP600 and Aorus Gen4 SSDs respectively, each of which is available in 1TB and 2TB configurations.

In time PCIe 4.0 SSDs will become cheaper, as more controller vendors enter the fray with competing  PCIe 4.0 offerings in late 2019/2020. Faster drives will also arrive in time, but if you need the fastest PCIe 4.0 SSDs on 7/7, these two SSDs are your primary options. Sequential read speeds of up to 5,000MB/s don't come cheap. 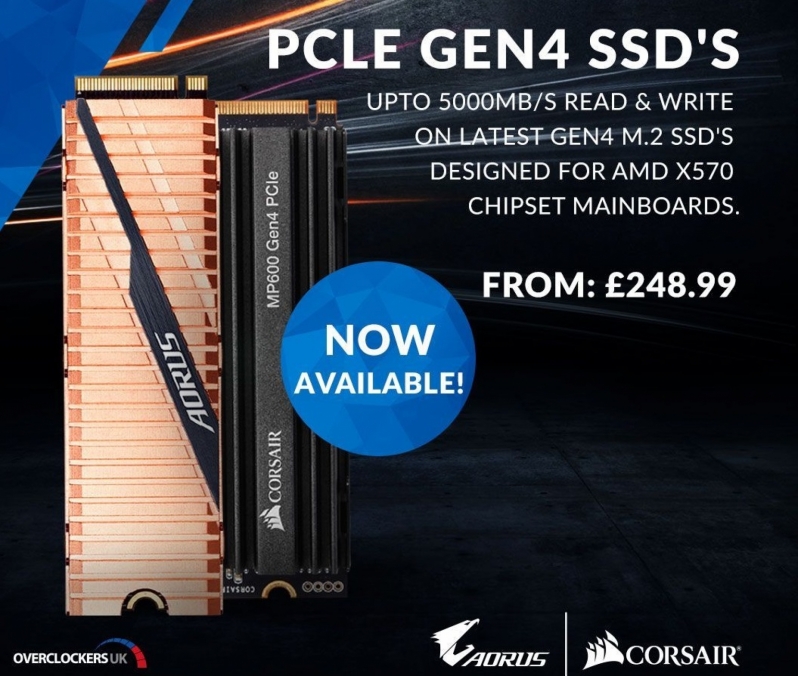 All of these SSDs are currently available to pre-order at Overclockers UK.

You can join the discussion on PCIe 4.0 SSDs becoming available to purchase in the UK on the OC3D Forums.

NeverBackDown
I'm more interested in seeing if the Q1 Depth and IOPS are much better than previous drives. If they are similar then really these would only be faster in benchmarks or massive file transfers..Quote

Avet
Quote:
Exactly what I was talking about on another post. Also, what would be the performance on PCIe 3.0? I hope Tom is taking notes for review.

NeverBackDown
Honestly I'm not sure if the first generation of PCIe 4.0 drives will be much better in Q1 and IOPS. I would suspect faster drives in the next year or 18 months in these areas.Quote

tgrech
Mainstream drives don't really target those areas, partly because the largest step you can make with minimising latency & improving random and low queue depth performance with flash is to use SLC across the whole device which would significantly harm price/GB and put it out of most consumer drives range, but you do have some vendors now going a step beyond just SLC & low latency controllers with more specialised drives for specialised high IOPs workloads like Samsung's Z-NAND and upcoming competitor solutions.Quote
Reply