Hard Disk Drives (HDDs) have a problem, an issue which is due to get worse as drive capacities continue to rise. Drive performance needs to increase with capacity, as otherwise an issue that's known as "stranded capacity" occurs.

Seagate has been working with Microsoft to address this issue, having created HDDs which can deliver higher I/O (IOPS) performance by using multiple actuators, delivering a performance increase of between 75% and 95% on Azure servers.

Think of it this way; imagine a server with twelve 8TB HDDs and a second server with six 16TB HDDs. Imagine that the d individual drives in each system offer similar levels of performance, both in terms of read/write throughput and IOPS. Which system is faster if you need to read all of the server's data? One system has twelve drives reading data, while the other has only six, making the system with smaller HDDs faster, at least in some.

While the example above is perhaps overly simplistic, the problem of "stranded capacity" remains a concern. Larger hard drives need to deliver increase IOPS performance to remain relevant, as storage capacity is meaningless if users cannot access their data quickly. With technologies like HAMR promising huge increases in HDD capacity over the coming years, it is easy to see why IOPS performance is a key research area for Seagate.

With Seagate's Exox 2X14 drives with MACH.2 dual-actuator technology, Microsoft has confirmed the validity of Seagate's development units by stress-testing their drives using the company's simulation tools. Microsoft partner Aaron Ogus has stated that Seagate has been able to achieve a "close to two times" throughput improvement over the company's currently deployed single actuator HDDs, delivering on the design goals of its MACH.2 technology. 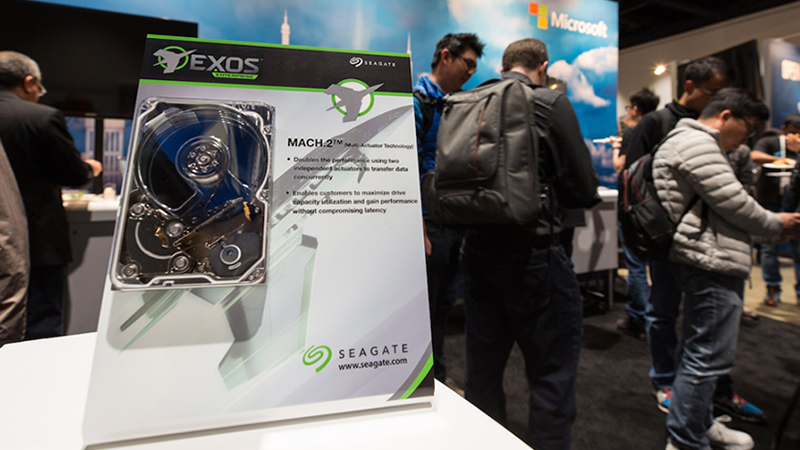 In a cloud data center, floorspace is key, and MACH.2 can offer users more IOPS performance from a single HDD slot than standard HDDs. In the future, Seagate's MACH.2 drives will be deployed across Microsoft's cloud services.

In every cloud data center, floor space is at a premium — and for many applications cloud providers are trying to get more IOPS out of the same slot.

MACH.2 drives will be deployed in support all of Microsoft’s CSP services including Azure and Exchange — the breadth of applications sharing floor space means it’s at a premium. Microsoft wants to minimize slot costs, which is a function of floor space, power, and cooling among other things. When a customer finds IOPS trending down on the types of drives installed, they have to look at other avenues such as adding dual-actuator hard drives.

Microsoft’s Exchange architecture is constantly tuned to maximize server throughput. Seagate’s MACH.2 technology will allow Exchange to continue deploying larger and larger HDDs while maintaining SLAs for latency. Seagate’s new platform is allowing Microsoft to deploy higher capacity drives like the 14TB Seagate 2X14, as Seagate’s MACH.2 technology lets them get the throughput they need to support Exchange at that capacity.

You can join the discussion on Seagate's high-performance MACH.2 HDDs in Microsoft's Azure infrastructure on the OC3D Forums.

robbiec
Don't understand this, I can right now pick up a Samsung PM1633 30TB unit in a 2.5" form factor, all flash with iOPs better by a factor. Its successor the PM1733, again in 30TB & 2.5" but with PCIe4 U.2 is due to hit the channel early 2020. Flash wins if you're space constrained or looking for iOPs so that data centre floorspace is effectively a fib. Price per TB sure I think, but don't mechanicals run warmer than flash and are these Seagate units 3.5 or 2.5s?Quote

WYP
Quote:
It about the balancing act. Speed, pricing and capacity all matter. These drives allow HDDs to be more viable over a wider range of workloads; especially as capacities increase with HAMR. This is an important factor for the long term viability of HDD technology.

If you have all the money in the world, yes, SSDs are better; but if you have a budget (which everyone ultimately does) you will go for HDDs if they meet your performance and capacity requirements. This tech allows HDDs to deliver more performance per drive, making the tech more viable. This is especially true as we move to higher capacity drives.

Yeah, you can get a 30TB of server-grade SSD from the likes of Samsung, but how much does that SSD cost? How much is 30TB worth HDD cost by comparison?

HDDs will remain relevant so long as it delivers on price/capacity and can offer enough performance to meet the requirements of enterprise/server workloads. This tech will help on the performance side, and HAMR will deliver on the capacity side.Quote

tgrech
Also have to remember that in high temperatures and very demanding environments SSDs aren't really suitable for cold storage or long term storage beyond their rated life, HDDs are much more stable and "inert", less likely to slowly corrupt over time especially while turned off for long periods, which is another factor in why they're pretty much always still at the colder end of any secure cloud storage service.Quote

robbiec
Quote:
6500 for the 30TB Samsung if I use my corporate account. Cant get a HDD above 16TB right now but they come in at about 500 with a SATA interface. Add 75 if you want SAS. So 1/10 of cost. This time last year the Samsung cost 15K though.Quote
Reply