This drive will launch with 2TB and 4TB flavours

If there is an SSD manufacturer to watch out for, it's Sabrent, an up and coming SSD maker who has done a lot to innovate within this marketplace. To start, they were one of the first SSD markers to adopt QLC NAND within their high-performance RocketQ series of M.2 NVMe SSDs, and later they became the first to release an 8TB QLC-powered NVMe SSD onto the consumer market.

We reviewed Sabrent's 8TB Rocket Q NVMe SSD earlier this month, and to say the least; we were very impressed. Now, Sabrent has revealed a PCIe 4.0 QLC-based SSD, bringing Sabrent's performance levels to new heights while continuing to use QLC NAND.

In the US, the 2TB and 4TB versions of this drive cost $320 and $770 respectively. Right now, both of these drives appear to be available with and without a premium heatsinks. Purchasing the heatsink-less version will save users around $20.

With the Rocket Q4 series, Sabrent is boldly going where no SSD manufacturer has gone before, merging the raw data rates of PCIe 4.0 and the capacity of QLC NAND to create something which no other SSD maker has. The question now is whether or not this drive's use of QLC NAND will be a major negative for the drive, or if this drive will repeat the success of its PCIe 3.0 based counterpart. 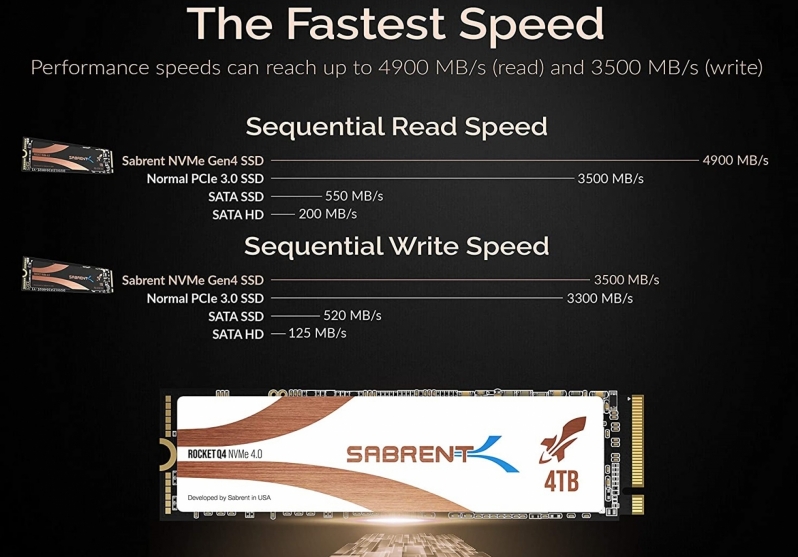 You can join the discussion on Sabrent's Rocket Q4 series of QLC-powered PCIe 4.0 SSD on the OC3D Forums.

Bagpuss
I thought QLC Nand was really only a drawback in professional productivity apps.


If you just want a fast storage SSD for games, it doesn't really make any difference, does it?Quote

Avet
I would have like to see TLC. They already have 4TB TLC PCI-E Gen 3 drive.Quote

NeverBackDown
Quote:
NVMe speeds currently on PC make no difference over a Sata SSD. I mean the only real benefit is games install a little faster compared to Sata.


Quote:
This is just a cheaper alternative. A noticable amount less but with QLC having shorter lifespan might be worth to spend the extra money.Quote
Reply