SSD manufacturers are currently pushing the limit of what's possible over PCIe 4.0, with many manufacturers creating SSDs that can deliver speeds in excess of 7 GBps.  KIOXIA, one of the world's largest producers of NAND flash, has started teasing a "Next-Gen PCIe Gen5 Prototype" SSD that can deliver speeds of over 14 GBps, doubling the speeds of today's fastest SSDs.

PCIe 5.0 will arrive on consumer-grade CPUs and motherboards with Intel's Alder Lake CPU platform, ushering in a new era of high-speed connectivity. With their prototype SSD, KIOXIA has also showcased boosted I/O performance over the company's current-generation SSDs as well as lower response times. Not only does KIOXIA promise higher sequential speeds over PCIe 5.0, but the company also plans to deliver SSDs with lower read/write latencies and greater random I/O performance.

KIOXIA currently plans to launch a PCIe 5.0 based CD7 SSD in Q4 of this year. This SSD will use the EDSFF E3S form factor and is designed to use four PCIe 5.0 lanes with an 8-channel controller. A 16-channel version of this controller will also be released later to handle enterprise-level applications. 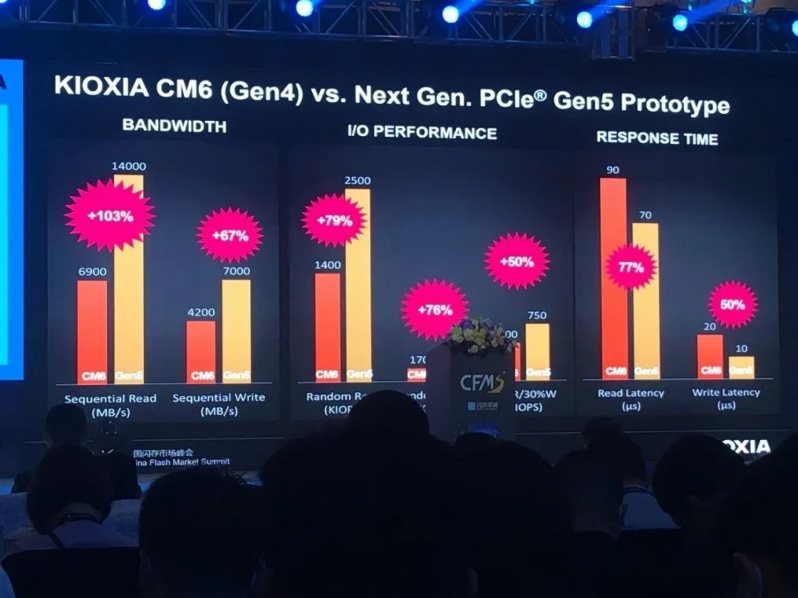 KIOXIA has shown the world that the SSD market isn't slowing down. Manufacturers are already reaching the limits of PCIe 4.0 and are pushing further as PCIe 5.0 devices enter the consumer and enterprise markets.

It will take a while for PCIe 5.0 to become commonly available on mainstream devices. Still, you can bet that SSD manufacturers are looking into the future and are preparing PCIe 5.0 ready devices for when the market is ready for them.

Intel's Sapphire Rapids processors are due to launch with support for up to 80 PCIe 5.0 lanes in 2022. These processors will be built using Intel's "Intel 7" (formerly 10nm Enhanced SuperFin) process technology. Intel's Sapphire Rapids launch is why KIOXIA plans to launch PCIe 5.0 ready devices in Q2 2022, as these devices will be paired with Intel's first PCIe 5.0 ready server processors. Whether or not we will see PCIe 5.0 storage on mainstream desktop platforms in 2022 remains to be seen.

You can join the discussion on KIOXIA's planned PCIe 5.0 SSDs on the OC3D Forums.