Samsung's high-end M.2 SSD is getting a storage upgrade!

At launch, Samsung only offered its 970 Pro SSD with 512GB and 1TB variants, opting to only release 2TB M.2 SSDs in the form of their TLC-based 970 EVO and later their 970 EVO Plus. This made a lot of sense, as TLC SSDs offers increased levels of storage density per NAND chip, though this comes at the cost of reliability and performance.

Given the fact that this drive is marketed as a 970 Pro series drive, we do not expect to see any major changes to the 970 Pro's performance characteristics, as the drive is likely to utilise the same Phoenix controller chip and has a similar amount of DDR4 cache memory as Samsung's existing 970 PRO series SSDs.

With a new 970 PRO model appearing at retail, it seems unlikely that Samsung plans to release a next-generation 980 series of NVMe SSDs anytime soon, though this is merely conjecture. 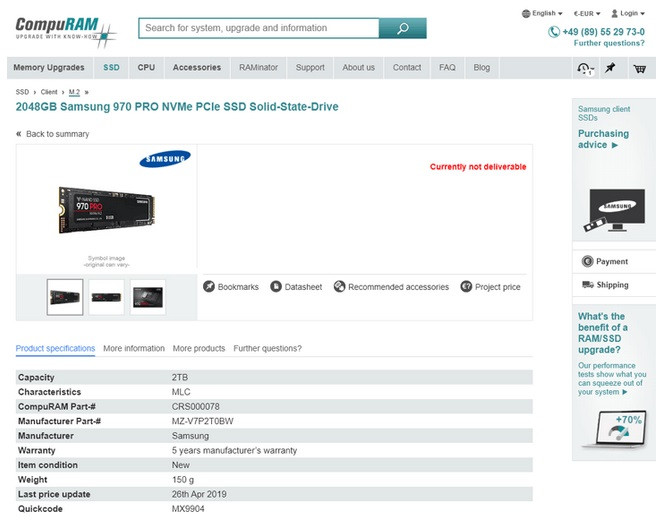 The good news here is that soon up to 2TB of MLC storage will be available in the compact M.2 form factor, which is great news for high-end PC builders, as the benefits of MLC NAND have the potential to make a huge difference in certain workloads. That said, most consumers would be fine with more affordable TLC-based SSDs like the Samsung 970 EVO Plus.

You can join the discussion on Samsung's 970 PRO 2TB SSD on the OC3D Forums.

Dawelio
I personally have had the 970 EVO 2TB version for a year now or since it launched, and I love it

WYP
Quote:
TBH most people don't need more than the EVO, especially now that the EVO + version has boosted its performance.

The benefits of MLC NAND are really for a certain type of user, who does a lot more reads and writes or specifically needs the performance characteristics of MLC NAND for their workloads.Quote
Reply