Can Optane mitigate the shortcomings of QLC?

Intel's latest memory technologies have two problems that hinder their mass adoption, at least within the storage market. Optane, while incredibly fast and responsive, it's expensive, and while QLC is cheap, its performance can sometimes leave a lot to be desired.

Optane's biggest selling point is that it sits as an interim between DRAM and NAND flash, offering non-volatile storage with speeds and responsiveness that can often straddle the line between the two technologies. This is why Intel is hoping to utilise Optane has a high capacity alternative to DRAM in servers, as while it isn't as fast and responsive as DRAM, it can make up for that by offering incredibly high capacities at low prices.

So what if Intel merged their Optane memory with a QLC SSD; offering a large cache that is significantly larger than any DRAM cache SSD while providing the ability to accelerate certain frequently used files? Now this question has moved beyond the realms of the hypothetical and into reality, thanks to Intel's upcoming Optane H10 SSD.

Thanks to slides that were released by dylan522p on Twitter, we now know that the Optane H10 SSD will come in several flavours, a model with 16GB of Optane storage and 256GB of QLC memory and models with feature 32GB of Optane memory and either 512GB or 1TB of QLC NAND respectively.

According to the slide below, both the Optane and QLC sections of the drive are merged to become a single volume, with the Optane storage accelerating files that are needed for important tasks while monitoring frequently used files for further acceleration when they are used in the future.

If the slide below is representative of common workloads, Intel's "Teton Glacier" will be able to offer speeds that rival or surpass the likes of Samsung's 970 Pro while using affordable QLC NAND. When compared to an equivalent QLC-only SSD, Intel's Tenton Glacier (Optane H10 SSD) was able to offer a 2x performance boost in PCMARK Vantage's HDD test, showcasing the benefits that Optane acceleration can provide. 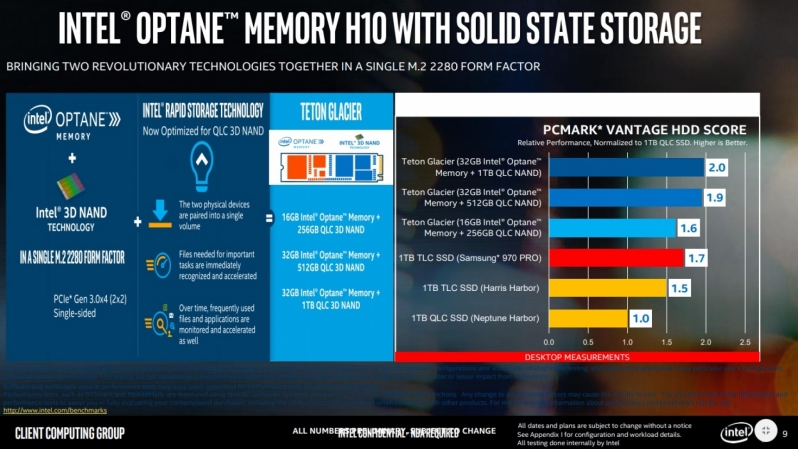 If these results are anything to go by, Intel has managed to work around the problems associated with both QLC NAND and Optane memory in one fell swoop, creating a product that should offer incredible performance at what should be a reasonable price. For perspective, you can purchase an individual Optane 32GB accelerator drive and an Intel 1TB QLC 660p SSD for less than a Samsung 970 EVO SSD, never mind the 970 PRO that's used in the chart above.

You can join the discussion on Intel's planned Optane Memory H10 SSD on the OC3D Forums.