Intel and Micron have announced two innovations within the memory industry, managing to stack their 3rd Generation 3D TLC memory up to 96 stacks, from 64 stacks, to offer industry-leading storage densities. Alongside this, both companies have also created 1Tb QLC (Quad-Level-Cell) memory dies, providing a 33% increase in storage densities over their TLC (Triple-Level-Cell) counterparts.

In the image above you can see a comparison between the four main NAND memory types, each of which are defined by how much data is contained in each memory cell. Each piece of data can be stored as a 1 or a 0, with each level of capacity coming with an exponential increase in complexity. With SLC there are two states, 1 and 0, with MLC coming with four states, 11, 10, 01 and 00, with each increase bringing with it a 2x increase in the number of memory states.

Typically, each move came with reduced NAND performance and decreased write longevity, making many think that QLC memory was off the cards for NAND memory. Today most memory manufacturers are working on QLC memory, finding that the performance and reliability drop are not as big as the move from MLC to TLC, making QLC extremely attractive for the consumer market.

By increasing the amount of data that can be fitted into a soncle cell, NAND manufacturers can effectively give customers larger memory capacities at almost no additional cost, allowing the price of SSDs to be driven down through the use of the new NAND type. While more complex NAND offers decreased performance and reliability, these issues can mostly be worked around if the user primarily focuses on read-centric workloads or used a DRAM or SLC cache to accelerate the drive under certain conditions. 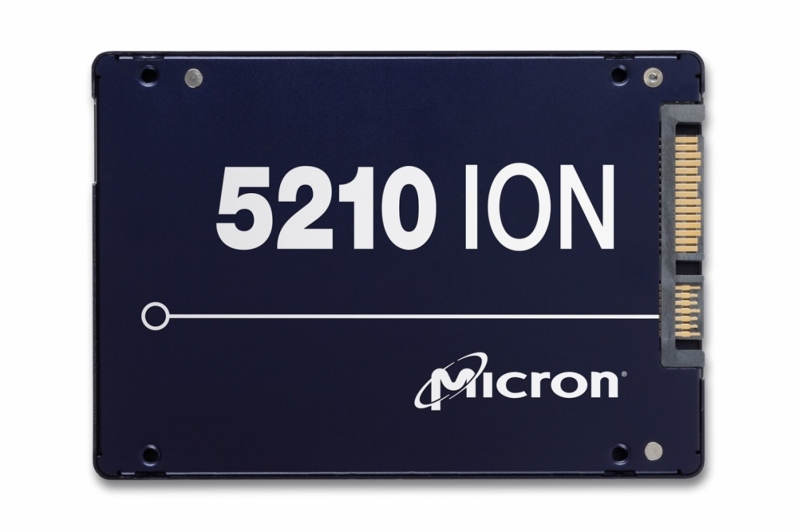 Micron is starting their QLC journey on the enterprise market, a bold move from the SSD maker, focusing the drive on read-heavy workloads such as real-time data analytics and content delivery. Here the read performance of SSDs can easily outshine a traditional hard disk drive, with QLC NAND offering increase value for money when compared to other SSDs from a cost/capacity standpoint.

These new ION 5210 series drives will ship in the industry standard 2.5-inch 7mm SATA form factor with a minimum capacity of 1.92TB (almost 2TB!) and a maximum capacity of 7.68TB, allowing these drives to be used within most modern servers while providing performance levels that can easily exceed HDDs.

QLC memory will be well suited to the consumer SSD market where write endurance is much less of a concern than the enterprise space, and cost/GB is a crucial metric for most consumers.

When combined with Intel/Micron's 96-layer 3D NAND technology both companies can increase the capacity of their TLC NAND from 1Tb (128GB) to 1.5Tb (192GB), offering insane storage capacities to the market, assuming that their workloads are suited to QLC's disadvantages.

You can join the discussion on Intel/Micron's 64-layer QLC and 96-layer TLC NAND on the OC3D Forums.

RobM
about time the capacity went up and price came downQuote

AlienALX
Quote:
For them. Edit. If I had a quid for every time I have heard that BS I would be rich.Quote

TheF34RChannel
Quote:
He he yeah. Looking for an affordable 2TB M.2 Samsung 970 Evo for the main drive and the 2/4TB SATA variety for storage. Good luck to me...Quote
Reply