AMD's X570 platform users the consumer PC market into the era of PCIe 4.0, providing us with unheard of levels of bandwidth and the ability to create faster SSDs than ever before.

Gigabyte's Aorus division has seen the potential of PCIe 4.0, having already showcased one of the world's first PCIe 4.0 complaint M.2 NVMe SSDs. Gigabyte's Aorus Gen4 NVMe SSD is already capable of reaching 5GB/s sequential read speeds, but what happens if we try to push these performance limits further?

Yes, Gigabyte has decided to create a PCIe 4.0 16x SSD, creating what's likely to be a 4x RAID configuration with their latest M.2 NVMe drives to offer sequential read and write speeds that are in excess of 15GB/s. That's some crazy performance levels.

This SSD requires active cooling and a copper heatsink, with the drive's total capacity of 8TB adding credence to our hypothesis that this is a 4x RAID configuration of Gigabyte's Aorus 2TB PCIe 4.0 SSDs. The levels of SSD performance shown here are staggering, there is no other way to put it. 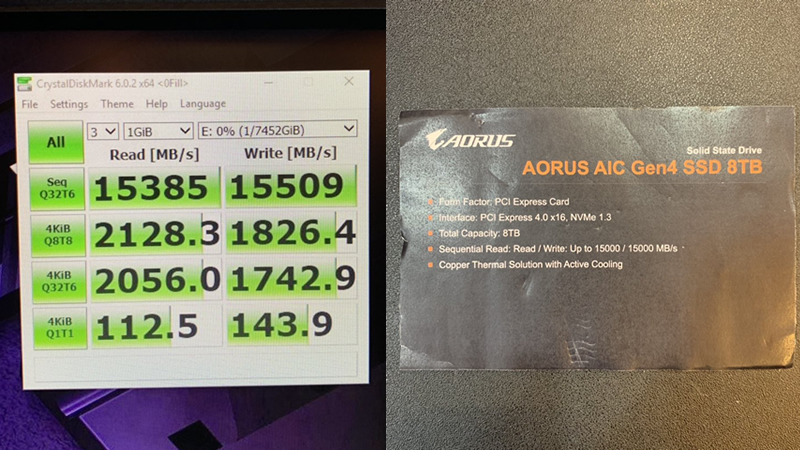 At this time it is unknown whether or not Gigabyte plans to release this insane SSD as a consumer product, or if they plan to launch this product as a standalone 4-way PCIe 16x to 4x PCIe 4.0 4x M.2 adaptor. Either way, Gigabyte has the ability to create some blitzing fast SSD products, which is great news for early adopters of PCIe 4.0.

You can join the discussion on Gigabyte's insane Aorus PCIe 4.0 16x NVMe SSD on the OC3D Forums.

g0ggles1994
Had to check this twice, thought the photo was a Navi reference card for a secondQuote

NeverBackDown
I wouldn't even know how to fill more than 2TB of that...Quote

NeverBackDown
Quote:
Yes, it's the only way to reach 15,000MB/s with PCIe4.0 and 8TB of storageQuote