Gigabyte may be the first to offer PCIe 4.0 complaint SSDs

Gigabyte has officially released their Aorus Gen4 NVMe SSD, one of the world's first PCIe 4.0 SSDs to offer speeds of up to 5,000MB/s. Aorus has confirmed that their drives are now "ready for release" and will be available to users soon, making it likely that Aorus will be the first to market with a consumer-grade PCIe 4.0 SSD.

Alongside this announcement comes confirmation that the drive will be available in 500GB, 1TB and 2TB forms, though at this time it is unknown whether or not the drive's 500GB variant will ship with decreased performance, much like lower capacity PCIe 3.0 SSDs. Aorus has confirmed that they are utilising Toshiba's 96-layer 3D TLC NAND  and Phison's PS5016-E16 controller and offers a robust all-copper heatsink design.

The drive will come in the M.2 form factor's standard 2280 form factor and utilise the PCIe 4.0 interface. AMD's X570 series motherboards will be the first to utilise PCIe 4.0, making AMD the only manufacturer that fully supports Gigabyte's latest Aorus series SSD. The best speeds that the Aorus NVMe Gen4 can offer will only be available via PCIe 4.0.

Below is a comment from Gigabyte's director of channel solutions product development, Jackson Hsu.

When the PCIe 4.0 specification was announced, GIGABYTE was already a step ahead in preparation for the development of the product. Through the smaller size and superior performance attributes of the NVMe PCIe 4.0 M.2 interface, performance seeking users will be able to unleash the best SSD performance,

GIGABYTE AORUS NVMe Gen4 SSD further advances the standards set by our previous SSD products. The SSD fulfills many users' expectations and users are getting better performance, a better thermal design, a GIGABYTE Ultra Durable certified product, and a nice selection of size capacities at 500GB, 1TB, and 2TB. 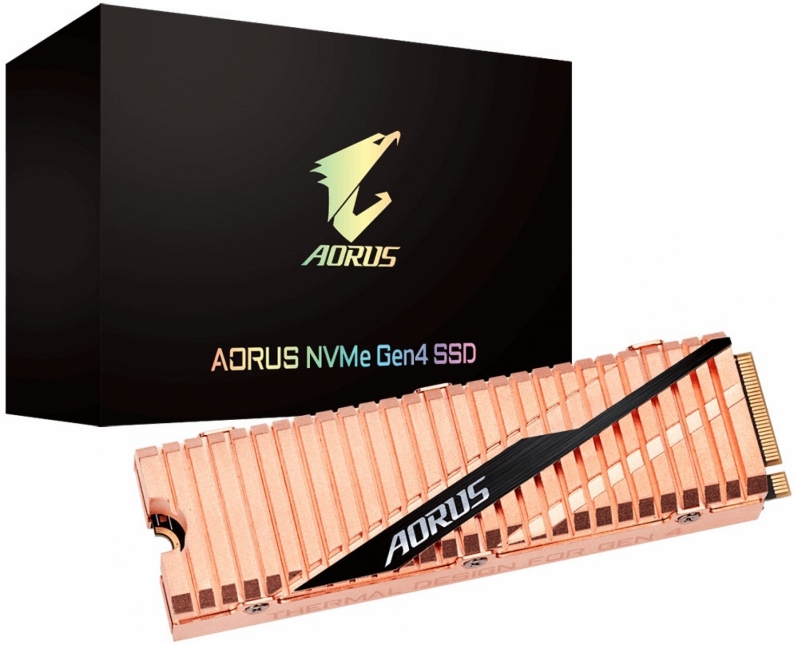 Gigabyte's Aorus NVMe Gen4 M.2 SSD is ready for release and will soon be available to users.

You can join the discussion on Gigabyte's Aorus NVMe Gen4 SSD on the OC3D Forums.

Warchild
Quote:
But when it tarnishes...

demonking
Quote:
Shame its about 10 years to early for an M.2 drive...

Everyone else is moving into RGB and mono colours while you want to go back to 1999. Paint it, coat it, put an RGB on it, take off the heatsink or do something, that design doesn't match anything else you sell, or anybody else for that matter so why go with that colour scheme?Quote

Warchild
Quote:
I would still take this block over the rest of the s**t they release now. Copper does look quite beautiful when polished. As does Nickel. I know i sound like a broken record, but all these RGB things just make me think of such immaturity I am shocked some users on these forums are obsessed over it.

It is all personal preference in the end. And I do poke fun at people, *cough DICE!* :P
But... There is a limit to when things return to the 90s tackiness when we saw LED lights on fans and cases in bright blue red and green. And i think we are there now. With the exception of White, or UV, I honestly dislike every build I see with bright colour schemes.

I think if I was going down the lighting path, I would still take cold cathode tubes over anything now, since they gave a soft warm glow that was evenly spread. Anywhere I can see an LED strip is an instant dislike. Its not uniform at all and always has focal points that distract me.

And this years award for RGB OTT goes to... Dicehunter for his RoG lighting that would be useful as a night light for a 4 year old!!!