AMD's Ryzen 3rd Generation processors and X570 motherboard platform will support PCIe 4.0, opening the door to SSDs and other PCIe solutions that are faster than what's currently possible over PCIe 3.0.

Corsair has seen the potential of PCIe 4.0 and knows that the speed limits of PCIe 3.0 limit today's M.2 NVMe SSDs. These limits are what prevent PCIe 3.0 SSDs from extending much past 3.5GB/s sequential write speeds when using an M.2 slot, but PCIe 4.0 has the power to address that.

Using PCIe 4.0, Corsair has created their Force MP600 series of NVMe SSDs, which will offer sequential read/write speeds of 4950MB/s and 4250MB/s respectively, with plans to hit retailer in July, the same time as AMD's PCIe 4.0 complaint processors and motherboards.

Corsair's MP600 SSD is built using 3D TLC NAND and a Phison PS5016-E16 controller. At this time, we do not have exact pricing and capacity information for this drive. Sadly Corsair has not provided performance numbers for the MP600's random I/O throughput. 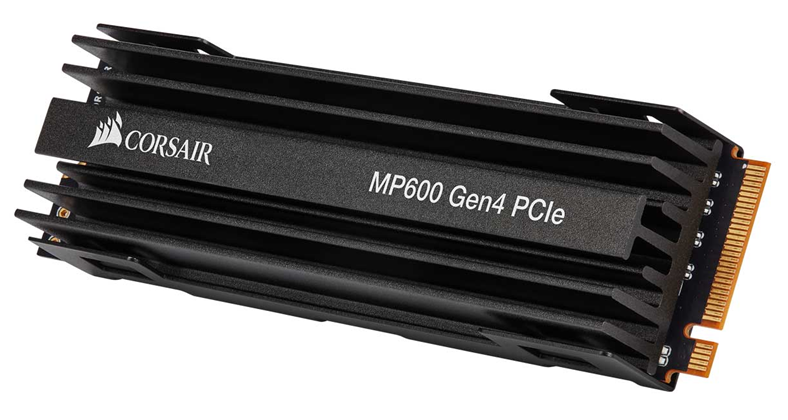 Given the size of the MP600's heatsink, it appears that Corsair's new PCIe 4.0 M.2 SSD consumes more power than the average PCIe 3.0 M.2 device. We should find out more about Corsair's MP600 series of SSDs as Computex 2019 progresses.

You can join the discussion on Corsair's Force MP600 series of PCIe 4.0 M.2 SSDs on the OC3D Forums.

NeverBackDown
Useless for most people but damn it's still fastQuote

Avet
Quote:
Actually it is quite useful. Gigabyte lists 750k read IOPS, and 700k write IOPS. That is quite a lot more than Intel 905p (575k/550k). I expect them to be less expensive than Intel drives. We need to w8 for proper tests, but this is very exciting.

Storage drives are, by far, the slowest part of the system. And for a very long time the SSD was the best option. Now they are getting faster, and faster every year, and prices are going down.Quote

NeverBackDown
You didn't give me a single reason as to why it's useful. All you did was list specifications. They are very few who would benefit from this.

Unless you are editing raw 4k/8k files this isn't something beneficial for most people. If you put a normal 3.0 drive even x2 speeds against this the average person would not notice a difference.Quote

Avet
Quote:
Everything that you do benefits from more IOPS. Even if you use Word, browse internet, and play games you will see slight improvement. If you care, or not for that slight bump is the other question. And the answer is most people don't. But for everyone else who actually uses computer for something faster is better. The point of my comment was progress. Stuff is happening. We get faster products for roughly the same price.Quote

NeverBackDown
Yes of course you will benefit, you know what I meant. I was referring to the fact that an insane amount of people won't notice. You'd only notice if you were actually using those speeds. Loading windows and opening Chrome isn't the same as scrubbing a timeline with raw 4/8k footage.Quote
Reply