Gigabyte is ready for PCIe 4.0.

Gigabyte is preparing for the post-PCIe 3.0 era with AMD X570 motherboards and self-built solid-state storage solutions. Yes, Gigabyte is preparing to enter the PCIe 4.0 arena, with their "Aorus NVMe Gen4 SSD" the company's first SSD to offer sequential read speeds of 5,000MB/s.

To create their SSD, Gigabyte is using Phison's  PS5016-E16 controller alongside Toshiba's 96-layer 3D TLC NAND memory and an external DDR4 cache, which connects to a PC via a PCIe 4.0 x4 interface. Like other early PCIe 4.0 SSDs, the AORUS NVMe Gen 4 comes with a large heatsink design, with Gigabyte opting for a solid, industrial copper appearance.

Gigabyte's Aorus PCIe 4.0 SSD will come in 1TB and 2TB flavours, likely due to the levels of NAND parallelism that's required to maintain PCIe 4.0 ready performance levels. When compared to standard PCIe 3.0 SSDs, Gigabyte touts a 40% performance improvement with their Aorus PCIe 4.0 SSD, stating that they are ready for the "next generation of computing".

When it comes to sequential performance, Gigabyte's Aorus PCIe 4.0 NVMe SSD offers read speeds that can extend as high as 5,000MB/s and write speeds of 4,400MB/s. In terms of random read/write IOPS, the SSD can also offer 750K/700K performance levels, with the drive shipping with a 5-year warranty.

At launch, Gigabyte's Gen4 NVMe SSD will only be able to operate at its full speeds on AMD's X570 motherboard platform, and even then it will only work with Ryzen 3rd Generation processors, the only CPUs that support PCIe 4.0 out of the box. 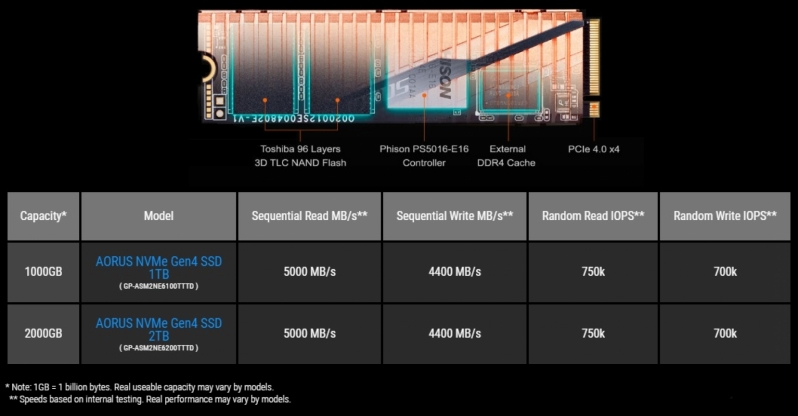 At this time it is unknown when Intel will support PCIe 4.0 on their mainstream desktop offerings, placing them in a position where they cannot take advantage of the world's fastest storage solutions, giving them a clear disadvantage when compared to AMD. Gigabyte has not revealed the pricing or release date of their AORUS Gen4 NVMe SSD.

You can join the discussion on Gigabyte's AORUS Gen4 M.2 NVMe SSD on the OC3D Forums.