With the MMO's Battle for Azeroth expansion, World of Warcraft gained support for Microsoft's DirectX 12 API, a move which prepared the game for the future with enhanced multi-threading support and increased performance levels for users of modern processors.

With the game's upcoming Shadowlands expansion, it looks like World of Warcraft will be taking another bold step forward with its engine, with Alpha files hinting at support for raytracing and other advanced graphical features. These references were uncovered by Lemon King on the WOW subreddit.

While these features do not work within Shadowlands' alpha, support for DXR (DirectX Raytracing) 1.0, Raytraced Shadows and Variable Rate Shading have all been found within the game's engine code, suggesting that Blizzard is adopting Microsoft's DirectX Ultimate feature set within World of Warcraft.

These features have the potential to make World of Warcraft look better and run faster on modern systems, with raytracing offering users improved visuals while Variable Rate Shading allows gamers to boost World of Warcraft's performance without any graphical downsides.

With the upcoming release of the Xbox Series X and PlayStation 5, it is possible that these engine upgrades could come as part of a multi-platform shift from Blizzard. VRS and DXR support are key parts of Microsoft's Xbox Series X, and similar features are likely included in Sony's console platform. Combine that with the use of powerful Zen 2 series processors, and there has never been a better time to bring World of Warcraft to consoles.

As World of Warcraft: Shadowlands approaches its launch, we expect to hear a lot more about the game's planned engine changes and other feature upgrades. 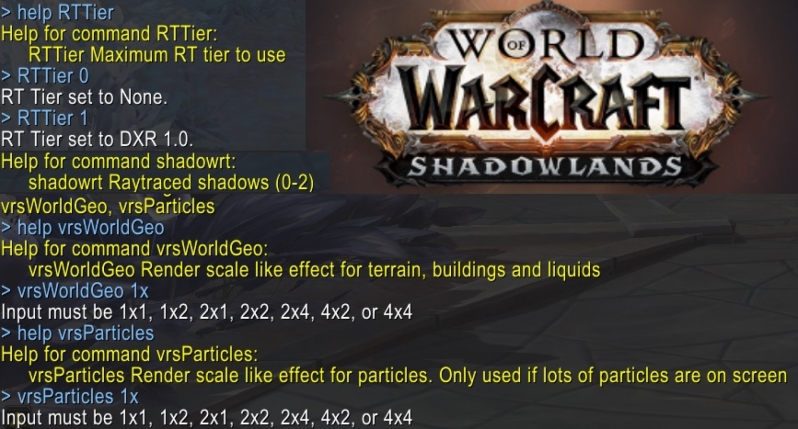 You can join the discussion on World of Warcraft Shadowlands possibly offering DXR raytracing and VRS support on the OC3D Forums.

Dicehunter
While I'm always pleased to see graphical updates, RT shadows is pretty damn boring, You have to do side by side screenshots to tell the difference, RT reflections would've been good to see.

What would be welcome is if they moved over to Vulkan, While DX12 gave a little performance boost, Vulkan would do so much more as we've seen with various games lately.Quote

NeverBackDown
The problem is they can use RT but the graphics of the game won't improve much considering how old the graphics are to begin with. A polished turd is still a turd.Quote

Avet
DX12 wasn't a little performance boost. I saw 30+ FPS improvement in Boralus. Wile new zones look stunning the older ones are seriously showing their age. What would really completely remodel the game is RT global illumination. OMG I really want it.

Apart from WoW Classic, Blizzard is really doing a great job on the game.Quote

Dicehunter
Quote:
Some parts of the game do look very pretty, What they need to do though is give the textures a little overhaul which I read somewhere last year is in the pipeline but RT is a fair bit easier to do so it's understandable they'd do that first.Quote

WYP
Quote:
Yeah, DX12 focused on CPU gains, and that was a huge deal in areas like Boralus. Raids were also said to see huge performance boost with high player counts.

I agree that global illumination would be great. Could even upgrade some of the older areas, and it provides its own type of shadows and ambient occlusion. Something like what Control has would be great.

TBH, it is nice to see Blizzard working on the engine like this, but there is still a long way to go. Maintaining backwards compatibility seems to be a huge problem for Blizzard.Quote
Reply