Need to delay your next Windows 10 feature update? That will soon be an option.

Microsoft has finally decided to respond to what is likely to be Windows 10's top feature request, one which users have been crying out for since the launch of the OS, or at least since their systems were last hit with a feature update.

Yes, Microsoft plans to finally give Windows 10 users more control over updates, allowing users of the OS to forgo feature updates until their OS current version becomes unsupported, while also offering the ability to pause all updates for a total of 35 days. Better still, some of these features will be coming to 1803 and 1809, which means that you will not need to install Windows 10's May 2019 (1903) update to start pausing feature updates.

For feature updates, this means that you could stop feature upgrades for around 18 months, which is good news for those who dislike updating to Windows 10's latest editions. By now, most PC enthusiasts have heard of the issues users face when installing a new Windows feature updates, especially with update 1809, which was delayed for months and pulled from download due to widespread system faults and other incompatibility issues.

Thanks to Microsoft's new "update experience" features, Windows 10 users now have the option to update to a new version of the OS on their terms, allowing them to delay updates as long as possible, or delay them long enough to ensure that the latest feature update is stable on their hardware configuration. In short, this is an extremely consumer-friendly move from Microsoft. 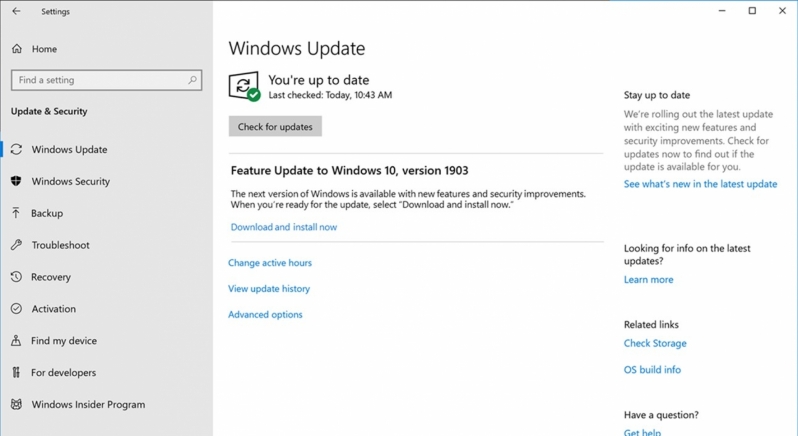 Windows 10 1903 will also allow users to adjust their system's active hours and allow users to avoid disruptive restarts during working hours. In addition to this, Microsoft has also worked to allow their updates to coordinate with systems to occur when users are away from their systems, minimising any perceived performance impacts of updates. In theory, this means that updates shouldn't harm your system's performance under heavy workloads, though this remains to be seen.

You can join the discussion on Windows 10's next feature update delivering users more update control on the OC3D Forums.

ET3D
Sounds great, and will release one Windows Pro code I have for other uses, since that's pretty much the only reason I upgraded my laptop from Home to Pro.Quote