With the recent release of the PS4 pro and the future release of the Xbox One Scorpio many console gamers have been wondering one thing, will these new consoles run 30FPS games at 60FPS? This question has been frequently asked by a large number of gamers, particularly after it was revealed that Destiny 2 would run at 30FPS on the PS4 and Xbox One.
In a recent interview with IGN, Bungie's Luke Smith and Mark Noseworthy were asked what benefits the PS4 Pro would bring to the game, asking if the game would be able to run at a higher framerate on Sony's latest hardware platform. The short answer is that Destiny 2 will not be able to run at 60FPS on the PS4 Pro, stating that the console did not have enough CPU horsepower to run the game at such a high framerate.

The console, the PS4 Pro is super powerful, but it couldn't run our game at 60. Our game's this rich physics simulation where collision of players, networking, etc, and like, it wouldn't run... [there's] not enough horsepower there.

While the PS4 Pro does have over 2x the GPU performance of a standard PS4,  the Pro only offers a mere 30% boost in CPU clock speeds and a 24% boost in memory bandwidth, which is simply not enough to allow the game to be upgraded from 30FPS to 60FPS.

The PS4 Pro's specifications are intended at boosting a game's resolution and to provide a boost in CPU performance that will help provide more stable framerates in games, which is why 60FPS conversion are rare on the platform and enhanced game resolutions are so common. In simple terms, the PS4 Pro has the GPU performance for 30FPS to 60FPS game conversions but lacks the CPU performance to make it happen.

But there is tonnes of GPU power in the PS4 Pro. That's why we're doing 4K, right?
It's on the CPU side. Destiny's simulation, like we have more AI, more monsters in an environment with physically simulated vehicles and characters and projectiles, and it's part of the Destiny magic, like that, like 30 seconds of fun, like coming around a corner and throwing a grenade, popping a guy in the head, and then you add like five, six, seven other players in a public event; that is incredibly intensive for hardware.

Looking at things from a different angle, giving players a 60FPS version of Destiny 2 would also be unfair to standard PS4 Pro users, as the players with a higher framerate will be able to react to the game faster and have an advantage in PVP scenarios. No multiplayer developer in their right mind would give their game such a huge imbalance on console platforms. 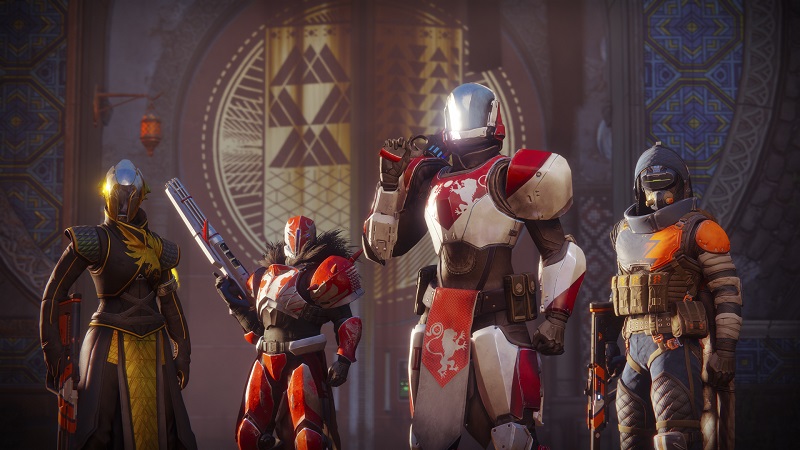 Using the same logic and looking at the specifications of Xbox's Project Scorpio, we can also see that the Scorpio will also not have enough power to run Destiny at 60FPS. Microsoft's new console will use a similar AMD Jaguar CPU to the PS4 Pro that runs at identical clock speeds, leaving the CPU once again as a limiting factor for the game.

It is clear that Bungie has decided to focus on 30FPS gameplay on consoles and to utilise each console's CPU to the fullest while doing so. This will prevent the PS4 Pro and Scorpio from giving the game huge boost in framerate, though it will allow users to potentially suffer from fewer framerate dips and play the game with higher levels of graphical fidelity.

PC will be the only platform where gamers will be able to play the game at a 60FPS, simply due to the fact that PC users have access to much more powerful CPUs than our console brethren. Today it is not uncommon to have a CPU that runs at 4GHz or over, which is much higher than the PS4 Pro's 2.3GHz while also running on more modern CPU architectures that promise more performance per clock than the ageing AMD Jaguar CPU core design.

You can join the discussion on Destiny 2's framerate on PS4 Pro and Project Scorpio on the OC3D Forums.

NeverBackDown
Or they could you know not increase graphics and instead focus on frame rate. And offloading the physics pipeline to the GPU since it's faster at doing it anyway.Quote

tgrech
"Using the same logic and looking at the specifications of Xbox's Project Scorpio, we can also see that the Scorpio will also not have enough power to run Destiny at 60FPS. Microsoft's new console will use a similar AMD Jaguar CPU to the PS4 Pro that runs at identical clock speeds, leaving the CPU once again as a limiting factor for the game. "

This isn't strictly true, it no longer really makes sense to do clock for clock comparisons between "clean" Jaguar and "Evolved" Jaguar. Besides Scorpios clocks being around 10% higher than the PS4's, the Scorpios cores also have to do considerably less work. There's far more baked in logic for unloading things like audio processing, overlays, and now GPU command processing (Often a significant bottleneck and resource hog for the CPU). Meanwhile the lower memory latencies, increased memory bandwidth, and increased memory size should all deliver notably improvements to the efficiency of the CPU. And while it'd require more work from devs, improved support for UMA and HSA means offloading floating point heavy calculations(Like physics calculations) to the GPU would now be a far more efficient and practical process.

Still for competitive/gameplay reasons I'd be surprised if devs allowed Destiny to hit 60fps on Scorpio even if doing so was trivial.Quote

SPS
Quote:
Faster hardware doesn't make offloading physics to the GPU necessarily any easier. Some fundamental parts of physics don't lend themselves well to massively parallel architectures. Some parts of a physics engine even struggle with multithreading on the CPU, let alone GPU.Quote

tgrech
I never said he was wrong(In fact I kinda agreed with him), just pointed out there are holes in his logic, and gave a detailed explanation of why given what we know so far of the hardware difference between "traditional Jaguar" and "Evolved Jaguar". What did I say that wasn't factual? I often see gamer "Techies"


Quote:
At no point did I imply faster hardware alone made it any easier. However technologies specifically designed to improve memory cohesion and simplify the creation of software that takes full advantage of the heterogeneous of the APU will. Some parts (Mostly relating to control and flow) of almost every problem are better ran on the CPU, and any interactive physics will inherently require these forms of operations. However anything involving masses of geometry can be treated as an explicitly parallel floating point model, and these lends themselves well to SIMD FP processors. So basically, yeah you're right- The fact that interactive physics operations requires a mix of both of these types of calculations means it's very hard and sometimes(Previously) impossible to do an efficient implementation(Of interactive physics) purely on the GPU, but that's also why these technologies designed to make use of multiple types of core for a single problem with minimal data juggling are inherently beneficial to it.Quote
Reply