SteamVR has received a lot of ease of use improvements

Over time the state of VR gaming has improved significantly, thanks to software updates, increased competition and the release of more powerful PC gaming hardware. VR has never been this accessible on PC, though there is still a lot of work to be done before VR gaming becomes mainstream.

Valve has released a new update to SteamVR, upgrading the functionality of their SteamVR ecosystem to add two new features, Per-Application Settings and VR Auto-Resolution.

As its name suggests, Per-Applications Settings allow SteamVR users to customise their experience on a per-application level.  This change will reduce the amount of tinkering required when moving from game-to-game, allowing users to adjust options like gameplay resolution, a setting which will let games to run at a pre-defined resolution which can be above or below the resolution of your chosen VR headset.

SteamVR Auto-Resolution is a new feature which allows Valve's software to automatically adjust the resolution of a VR game to offer stable performance, increasing a game's resolution as high as possible while maintaining a steady framerate, delivering the best possible visual experience. Gameplay resolution can also be lowered on the fly to reduce the number of potential performance dips. SteamVR Auto-Resolution is a dynamic resolution option for VR, making the optimisation process for VR somewhat automatic, provided users want to enable the feature. 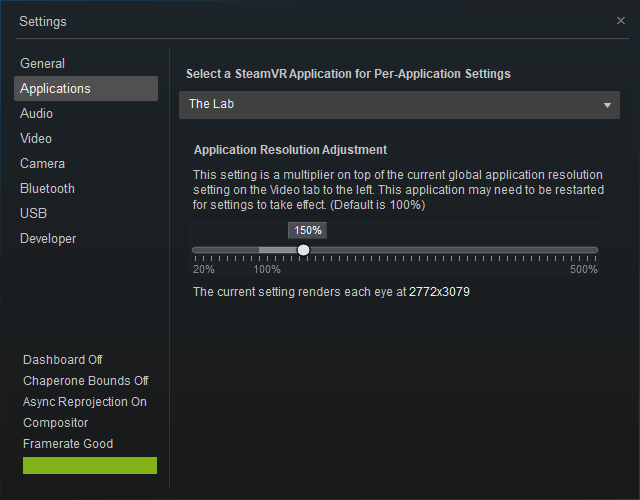 These two options will add to SteamVR's ease of use, allowing both gamers and developers to get more performance from today's hardware, either better utilising high-end GPUs with super-sampling when possible while also dropping a game's resolution when required to maintain a stable framerate.

This update to SteamVR also addresses several bugs, some of which has caused crashes or instability for certain users.

You can join the discussion on Valve's latest SteamVR update on the OC3D Forums.