And the voices of thousands to trolls were silenced

To mitigate the impact of so-called "Review Bombing" Valve has developed a new system which seeks to prevent "off-topic reviews", which are often generated en masse after some form of media controversy.

The most recent example of this is Gearbox' Borderlands series, which came under fire last week after it was announced that Borderlands 3 would be an Epic Games Store timed exclusive. This news caused fans of the series to target older games in the series with negative reviews, bringing negative reviews to their preferred platform, Steam, and to series entries that are not Epic Games Store exclusives.

Thanks to Valve's new anti review bombing features the company is notified when large numbers of reviews are impacting a title's review score, allowing them to step in and remove false reviews as quickly as possible. In the case of Borderlands 1/2, Steam removed around 4,000 false reviews from the game's aggregate score, though these reviews can still be viewed on Steam if users modify their review preferences. 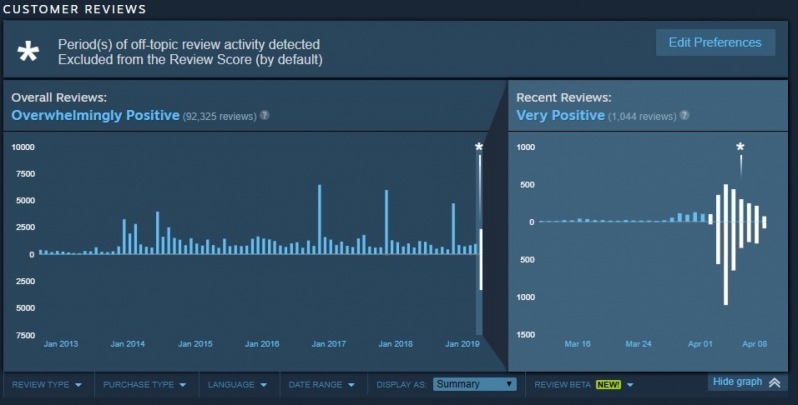 When Borderlands 3 releases on September 13th, the game will be available exclusively on the Epic Games Store, with the game coming to other PC platforms around six months later in April 2020.

You can join the discussion on Valve's anti review bombing measures on Steam on the OC3D Forums.

NeverBackDown
It's sad how low the trolls can get. Review bombing things that have 0 to do with the upcoming titleQuote

I know we gamers are the angriest bunch of people on the planet but this round of nerd rage I simply don't get. So the game is exclusive... So what? It's not on some small, fly by night retailer that you're nervous about installing... It's on the Epic Games Store which has a customer base larger than the population of most countries and I'm betting most of the ones exhibiting all the nerd rage already have installed on their PC.

It's also kinda nice that we finally have a retailer that looks like they can shake up Steam with some competition. That's never a bad thing.Quote

Warchild
Quote:
Tell that to the drones of Steam fan boys who threw their toys out of the crib because borderlands 3 is going to Epic first. 100% agree with you though. Or at least this new generation of gamers.

I would say before e-sports came, and twitch streaming and all the popularity behind gaming, it was a good community. Even World of Warcraft was no where near the vile toxic display it is today. And back then it had maybe triple the subscriptions it has now. Glad I left that game far behind.Quote

AlienALX
I never thought I would see as much petulance than the reaction over Brexit but this just reaffirms what tossers there are out there.

Warchild
Quote:
Don't think they could handle them. Too many people losing touch with reality and unable to cope with the most simplest of dilemma's / moderately stressful tasks.Quote
Reply