Here is the game's PC release date a system requirements

Many of Ubisoft's recent launches have been exclusive to the Epic Games Store and Uplay, with Anno 1800 and The Division 2 acting a prime examples, making Ubisoft's planned Steam release of Starlink seen like a strange position for the company, especially given their previously announced plans to expand their partnership with Epic Games.

Starlink: Battle for Atlas released with favourable reviews, but ultimately the game failed to meet Ubisoft's expectations, forcing the company to halt the production of new toys for the title. Starlink: Battle for Atlas can utilise a system called "Toys to Life", which enabled players to modify their starships on the fly using a real-world model of the game's ship, allowing weapons to be switched out without the need to navigate an in-game menu.

On PC, Starlink will support both Xbox One and PlayStation 4 controllers, remappable controls, an uncapped framerate and include support for 21:9 resolutions at launch.

Below are Starlink's PC system requirements, which showcase how achievable high framerates are within the title, with 4K 60FPS gameplay being possible on Nvidia's GTX 1080 Ti graphics card.

Starlink: Battle for Atlas is marketed with Nvidia G-Sync support and utilises the DirectX 11 API exclusively. Multi-GPU is supported through SLI, but Crossfire support is not supported. 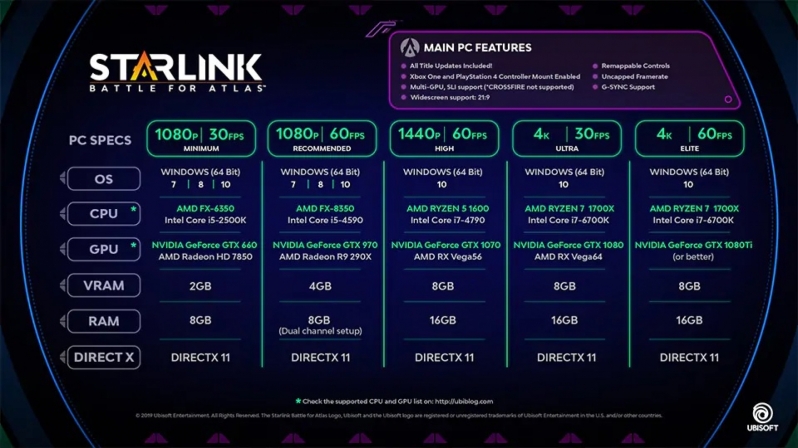 Starlink: Battle for Atlas will release on PC on April 30th, with the game being available digitally through Uplay and Steam.

You can join the discussion on Ubisoft's Starlink: Battle for Atlas coming to PC on the OC3D Forums.