One of the most daunting aspects of streaming is the setup, making sure that everything is ready on both the software and hardware side to ensure that your video streams are stable and professional.

To make things easier on streaming newcomers, Twitch has been working on a program called Twitch Studio, which will act as a new starting point for new game streamers. The aim of Twitch Studio to make streaming setup easy, detecting things like the user's microphone, webcam, monitor resolution and more to make streaming on Twitch easier than before. Beyond that, Twitch Studio will also feature customisable templates, integrated alerts and the ability to view Twitch chat with ease.

Twitch Studio comes with integrated support for capture cards from both Elgato and Avermedia, with the Twitch Studio app supporting Windows 7 and newer operating systems. There is no Mac version of Twitch Studio at this time, though it is being worked on.

Nvidia has confirmed that Twitch's Studio beta ships with Nvidia Encoder NVENC support and contains "all the latest optimisations for high-quality streaming and game performance".

Right now, Twitch Studio is available in beta. Expect the application to be updated and improved over time. Twitch's Studio app lacks support for 3rd party streaming services like YouTube and Mixer, which will be a downside for some users. That said, this is Twitch's dedicated streaming app, so support for competing services shouldn't be expected. 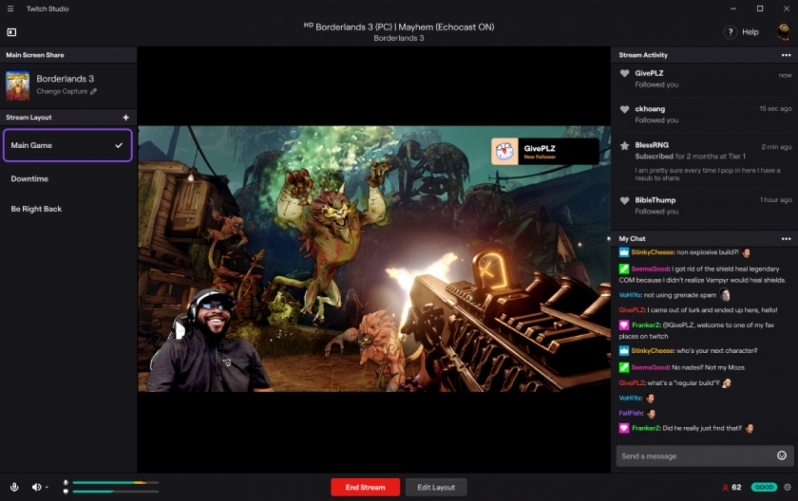 You can join the discussion on Twitch's Twitch Studio public beta on the OC3D Forums.