TrueNAS CORE 12.0 has launched, pushing FreeNAS into its grave

TrueNAS CORE 12.0 has launched, pushing FreeNAS into its grave

To simplify their development structure and reduce their operating costs, iXsystems has decided to merge FreeNAS and TrueNAS to create TrueNAS Core and TrueNAS Enterprise.

Like FreeNAS, TrueNAS CORE will be free to use, and users will be glad to know that TrueNAS will support more features than FreeNAS and should receive more frequent updates. Better still, TrueNAS will also feature better hardware support for AMD's Ryzen and EPYC processors, giving users stronger system performance than FreeNAS.

TrueNAS CORE has replaced FreeNAS, and TrueNAS CORE now acts as the free tier of TrueNAS. FreeNAS fans can use a FreeNAS UI theme if they want to keep the brand alive on their home servers.

Unlike prior versions of TrueNAS CORE, version 12 is an official release, addressing 30 bugs which were present within their final release candidate version. TrueNAS CORE is no longer a beta product, which means that the OS is now ready for home server use. 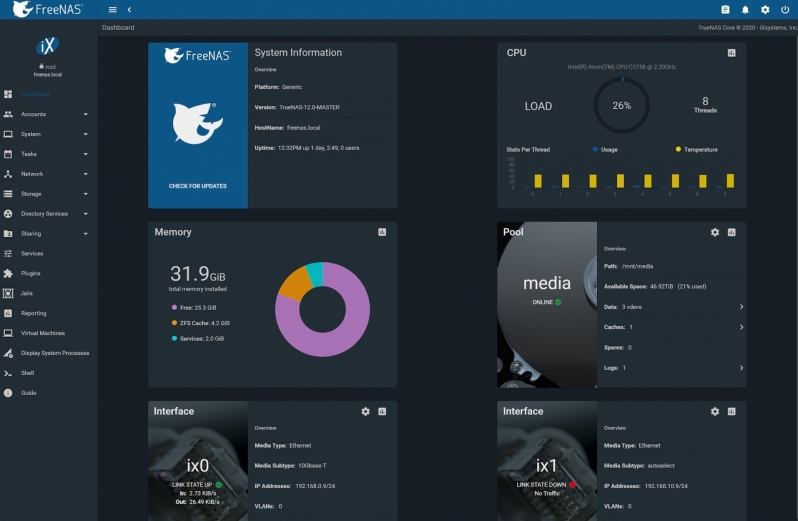 You can join the discussion on TrueNAS CORE replacing FreeNAS on the OC3D Forums.

looz
Triggered the upgrade from web UI and everything went swimmingly without extra input needed. FreeNAS 11.3-U4 to TrueNAS 12.0-RELEASE, that is.


I'm running shares and VMs there, so not the most complicated setup, but still impressed.

hmmblah
The upgrade at work from FreeNAS 11.3-U5 to TrueNAS 12 went off without a problem. I haven't upgraded my home server yet, but hopefully it goes as smoothly.Quote

WYP
I'm going to be setting up my NAS soon. Has been a long time coming. I am embarrassed by how long I have had hardware here.Quote

AlienALX
Thanks for the heads up. Not even had time to run mine lately tbh. I will update it though when I fire it up next/ /adds to list of things to do.Quote
Reply