Next week, AMD plans to reveal its new Threadripper PRO lineup of processors, bringing the company into the ultra-high-end workstation market by going beyond Threadripper.

Threadripper PRO is what happens when Ryzen PRO and EPYC have a baby, bringing the core counts and I/O options of EPYC and adding them to the Ryzen PRP series, giving customers AMD's "PRO Technologies", including PRO Security, PRO manageability and PRO Business Ready software certifications.

Videocardz has leaked the entirety of AMD's planned Threadripper PRO lineup, revealing models which scale from 12 cores all the way to 64 cores. All of these processors will support 8-channel memory, ECC memory and a wide range of DDR4 memory types, including UDIMM, RDIMM, LRDIMM and 3DS RDIMM memory. These processors can support up to 2TB of DRAM on a single processor.

Typically, these new Ryzen Threadripper PRO processors feature clock speeds which are a few hundred MHz slower than their standard Ryzen Threadripper counterparts, while offering users more memory channels and a total of 128 PCIe 4.0 lanes. The series is made up of the 12-core 3945WX, the 16-core 3955WX, the 32-core 3975X and the 64-core 3995WX. All of these processors feature a 280W TDP.

With Threadripper PRO, AMD is offering its users official support for 3200MHz memory over eight memory channels, and PCIe 4.0 support over 128 PCIe lanes. That's an insane amount of bandwidth to work with, giving workstation users a lot of options.

Threadripper PRO will help AMD to bring Threadripper into the offices of scientists, engineers and other professionals. This is the brand that will target Xeon in the workstation market, and we can see this market being hugely lucrative for AMD. 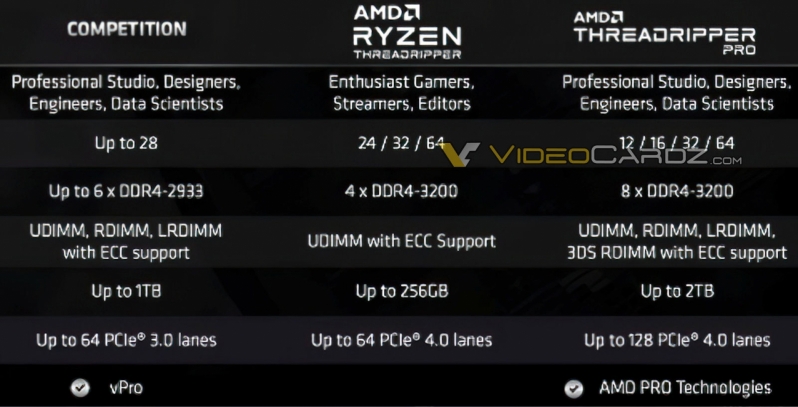 AMD is reportedly planning to release its Ryzen Threadripper PRO lineup on July 14th. Lenovo is already hinting at new workstation announcements on this date on Twitter.

You can join the discussion on AMD's Threadripper PRO workstation CPU lineup on the OC3D Forums.

Avet
This is amazing. We only need AIB partners to release some proper 7-slot workstation boards like ASUS WS X299 SAGE/10G, and they won't even need PLX.Quote

tgrech
The lack of a 12 or 16-core model on the "consumer Threadripper" line makes a lot more sense now, these are an absolute godsend for per core priced/license software which is still stupidly popular for a lot of enterprise OS' and software, very quickly ends up a far bigger cost than the hardware with some licenses(Even with just say a Windows Server OS license alone sometimes).Quote
Reply