The Vulkan API has been updated to offer Explicit Multi-GPU support, with support for SLI, Crossfire and VR Multi-GPU. This support is merely experimental in Vulkan Version 1.0.42, with the Khronos group planning on enhancing this support in a future version of the Vulkan API.
So far Multi-GPU scaling in DirectX 12 has shown some highly positive results when compared to DirectX 11, leaving us hopeful that Vulkan will eventually produce the same results. That being said, DirectX 12 has not been as widely adopted as most gamers have expected, with many developers failing to include DirectX 12 multi-GPU support at launch, which is hugely disappointing for users of Multi-GPU setups. 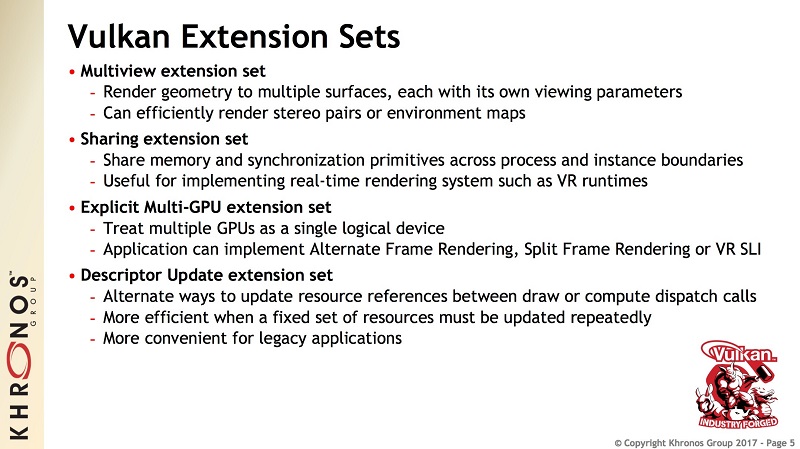 With Vulkan's new multi-GPU extension developers will be able to effectively pool GPU devices and utilise it like it is a single, larger GPU, without the need for an external protocol like SLI or Crossfire. The Vulkan API will also support AFR (alternate frame rendering) and SFR (split frame rendering), with the potential to pool memory resources in certain modes. 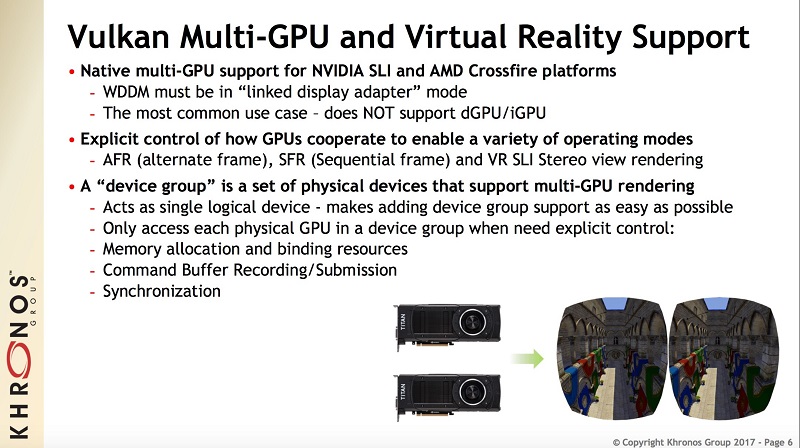 These are the early days of the Vulkan API, with continuous development to improve the API as we move into the future with enhanced code paths and refined features.

Remember that this is merely beta support for explicit multi-GPU, so don't expect every Vulkan game to support this feature out of the box moving forward, as developers will be required to put a lot of effort onto making the function work properly with a wide range of hardware without introducing additional latency or increased frametimes when utilising this "unfinished" feature.

You can join the discussion on the Vulkan API's new explicit Multi-GPU support on the OC3D Forums.

AlienALX
Now all we need are loads more Vulkan games

KTM_RULZ
Quote:
...That can be ported to Linux, so we can give MS the finger.


Quote:
Might have to with the way they're introducing controls to deny any program being installed outside the Microsoft Store. When enabled it will make Steam utterly useless and alienate the entire PC gaming communityQuote

WillSK
Doom 3 ran SOOO well on my PC. I would be more than happy to see more Vulkan gamesQuote