The Vulkan API has been brought to macOS and iOS, without Apple's involvement

The Vulkan API has been brought to macOS and iOS, without Apple's involvement

The Vulkan API was initially designed to support all platforms, though sadly Apple didn't actively encourage its development, instead focusing on their Metal API. This lack of support has left games to run on the ageing OpenGL API on MacOS and OpenGL ES on iOS, leaving gamers and developers at a disadvantage when running their programs on these platforms.

This lack of support means that developers need to work on an additional version of their software to run on Metal to receive the same low-level optimisations as Vulkan, but now Kronos has released MoltenVK, a subset of Vulkan that can translate Vulkan calls to Metal calls, enabling Vulkan on iOS and Mac OS.

MoltenVK came into existence thanks to Valve, LunarG and Brenwill Workshop, who together with Kronos created the open source SDK. Valve has already built a Vulkan update for DOTA 2 which offers an incredible performance boost in DOTA 2 on MacOS, which currently is only available using the OpenGL on Apple devices. Below you can see a graph which showcases up to a 50% increase in performance after moving to the Vulkan API on MacOS.

Vulkan offers developers the opportunity to bring their existing games to MacOS without the need for an all-new Metal API version, allowing the same low-level API to be used across Windows, Linux and MacOS. 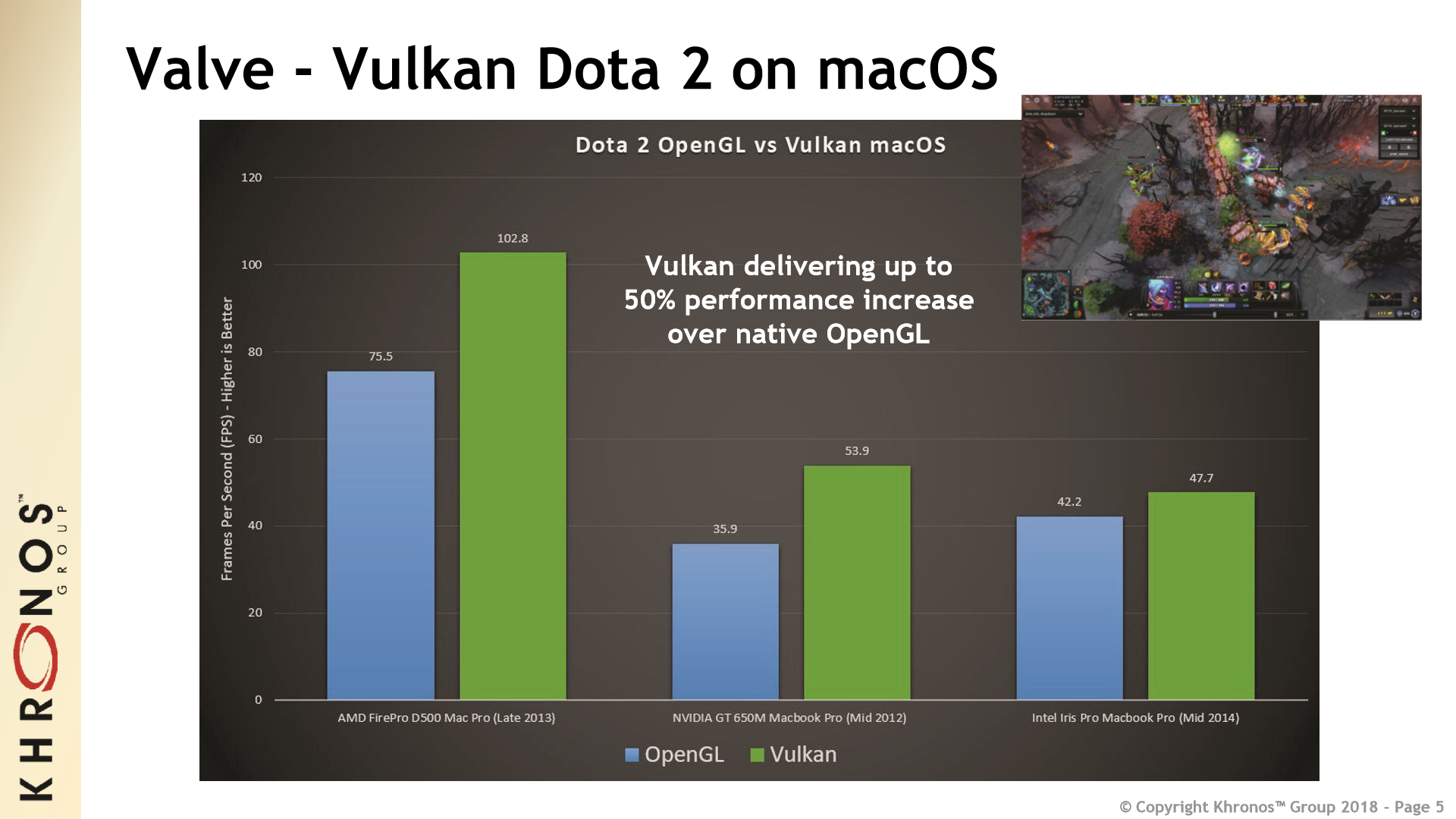 This new release answers a demand from developers to maximise the potential reach of the Vulkan API, allowing to address all major consumer operating systems and maximise the API's potential user base.

MoltenVK is designed to offer low-overhead translation from Vulkan to Metal, though sadly this means that the API can not use some of Vulkan's more advanced features. An updated version that translates to DirectX 12 is also in the works, allowing Vulkan-based products to enter sections of the market where DirectX support is a requirement, with a primary example being the Windows/Microsoft Stores.

You can join the discussion on the Vulkan API being brought to iOS and MacOS through MoltenVK on the OC3D Forums.

NeverBackDown
Is this the beginning of macOS for gaming?

Probably not, but never knowQuote

Bartacus
A lot of us gamers would be VERY interested in non-Microsoft options.

Ask any serious nerd if they would ditch Windows 10 in favor of Linux. The answer would likely be HELL YES. For a lot of us, gaming is the *only* reason we use Windows.Quote

Avet
Quote:
Linux yes. It is the best OS full stop. But Apple... I don't think anyone would change Windows for Mac.Quote

Bartacus
True, but give Mac owners some gaming capability might not be a bad thing. I sure wouldn't go Mac just to get away from MS. That's just swapping one demon for another.