The Results Are In! Battlefield V's Raytracing Performance Has Been Boosted

Now that's what I call a performance boost

The Results Are In! Battlefield V's Raytracing Performance Has Been Boosted

When Battlefield V first gained support for DirectX Raytracing, some PC gamers were up in arms, declaring that DXR Raytracing is not worth the performance cost, with even the mighty RTX 2080 Ti falling under 1080p 60FPS when the setting was maxed out in some areas.

DICE advertises their Raytracing features as a work in progress, as they knew that the performance of DirectX Raytracing could be significantly improved through the use of advanced ray culling techniques or other changes on the software side.

With the release of Battlefield V's Chapter 1: Overture patch, DICE promised to deliver performance increases that are as high as 50%, making the game a lot more playable when RTX Raytracing is enabled. Techpowerup has quickly tested the performance impact of the patch, revealing a huge increase in game performance.

Now, Battlefield V can be played at over 60FPS using an RTX 2080 Ti at 1440p Ultra settings, something which was unachievable before the patch without setting DXR Raytracing to Low or switching the effect off entirely. This change is facilitated both by tweaks within Battlefield V and within Nvidia's Geforce drivers, showcasing the infancy of Raytracing within the PC gaming market. Further improvements are expected in future Battlefield V/Nvidia driver updates. 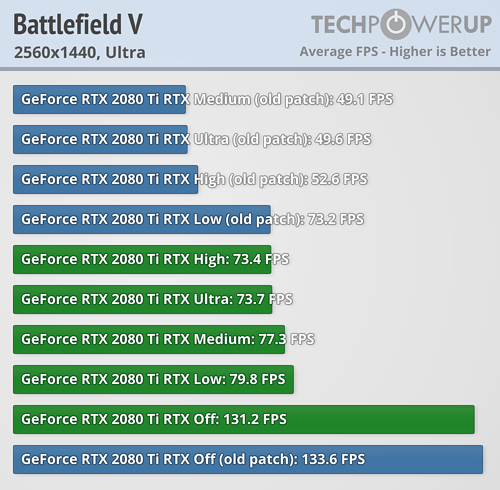 For a full look at Battlefield V's DXR performance improvements, we recommend having a look at Techpowerup's analysis, which looks at 1080p, 1440p and 4K resolutions as well as performance on Nvidia's RTX 2070, RTX 2080 and RTX 2080 Ti graphics cards.

You can join the discussion on Battlefield V's boosted raytracing performance on the OC3D Forums.

well if that is true it would be a sad joke.
you have a source for this?

i just read this

Dicehunter
Quote:
It's from Nvidia themselves -

AlienALX
This is what happens when you try to run before you can walk. Or rather tell some one you can run when you aren't really even able to walk.

5 years. If it's still around then it'll be aces.Quote

tgrech
Removing computations you don't notice the impact of is literally what optimisation is, regardless of the rendering technology. This was the very obvious route RTX was going to take, you apply it to everything, work out what people like, what people don't, and what people don't notice, then change how things work to match and repeat. We'll see something representative in a month or two- The idea is it should be raytracing significantly less stuff than it is now but without you noticing. Expect much more advanced algorithms for dynamically working out which objects will be raytraced as opposed to the catch-all approach disabling it for whole elements at the moment.

I wouldn't be surprised if we had a x4 increase in RTX performance from BFV launch to the first content DLC.Quote
Reply