The Epic Games Store is losing Hundreds of Millions, but Tim Sweeney calls it a "fantastic success"

The Epic Games Store is losing Hundreds of Millions, but Tim Sweeney calls it a "fantastic success"

As part of their legal battle against Epic Games, Apple has managed to gain access to some of Epic Games' financials, allowing them to reveal how much money the company has invested in the Epic Games Store, the company's competitor to Valve's Steam platform on PC.

Apple has revealed that Epic Games are set to lose at least $330 million in its battle against Steam to gain market share with their Epic Games Store. Apple has even alleged that Epic Games' PC storefront will remain unprofitable until 2027. These estimates come as part of Apple's arguments against Epic Games over the company's ongoing antitrust battle.

Epic Games are suing Apple over alleged antitrust issues on iOS. On iOS, Apple has allegedly limited competition on its platform by limiting developers and users to its App Store and payments system. With these restrictions, Apple has secured huge profits for itself and had limited the ability of its competitors to compete with Apple's apps within the iOS market.

By citing Epic Games' losses with their Epic Games Store on PC, Apple is defending its monopolistic practices on iOS, implying that competitors to Apple's App Store would not benefit consumers and that the benefits of Apple's locked platform outweigh the benefits of opening the ecosystem. Epic Games refutes these claims by calling their losses investments in what will be a profitable business model.

Epic Games has stated that their PC gaming storefront should turn an annual profit in 2023, with Tim Sweeney, Epic Games' CEO, stating that their investments have been "a fantastic success in reaching gamers with great games and a fantastic investment into growing the business!"

That’s right! And it has proven to be a fantastic success in reaching gamers with great games and a fantastic investment into growing the business! https://t.co/MN8OjM5FEP pic.twitter.com/Yl0LmCZjKB

Epic Games has called their losses so far investments in their PC storefront, remaining convinced that the Epic Games Store will become profitable. One of the Epic Games Store's main draws is that it will only take a 12% cut from game sales, giving developers and publishers a much larger revenue share. This is much lower than the revenue shares that Steam, the Google Play Store and Apple's App Store take from app/game developers.

You can join the discussion on the Epic Games Store's financial losses on the OC3D Forums. 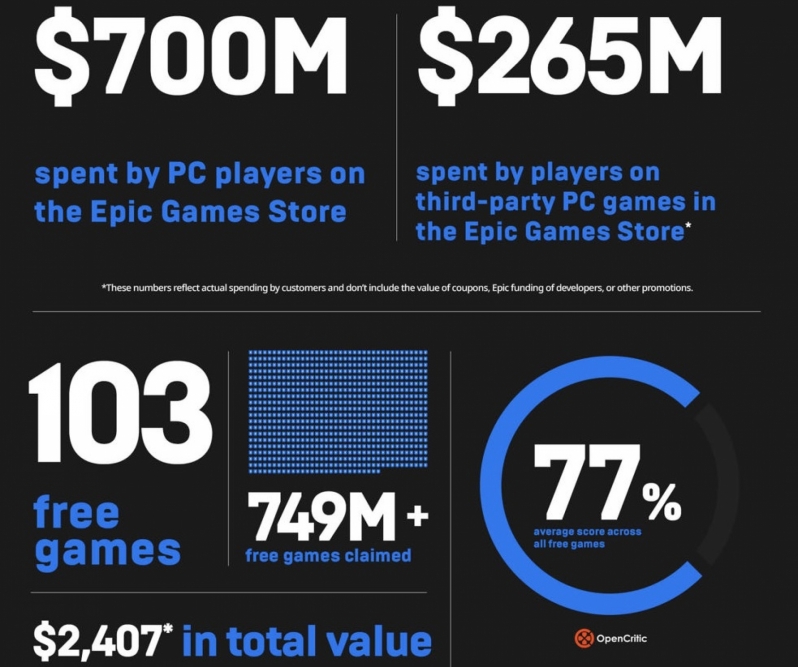 KingNosser
I use it don't like the app it needs a lot of work to ever be on par with steam.

Saying that it's been alright, free games is never a bad thing really, but when they have the £10 coupon with every game in a sale, it makes for some real bargains i got disco elysium for £10 at christmas time due to that so i'm not going to complain too much.

But it will never be a replacement for steam for me, just another app like Origin and Uplay ect, even GOG Galaxy is a far better application, so while I don't hate it given the choice i would prefer not to use it as much as it may seem that tim wants me too.Quote
Reply