The Batman Arkham Collection is currently available for free on PC

The Batman Arkham Collection is currently available for free on PC

At the time of writing, this trilogy is available for £49.99 on Steam, making this offer unmissable for any Batman fan on PC. All of these games are available to play on Windows-powered PCs can make up one of the best trilogies that modern gaming has to offer.

While this offer is ongoing, the Lego Batman Trilogy from Traveller's Tales is also available for free on PC, granting users of the Epic Games Store even more Batman goodness. This additional offer allows younger PC gamers to enjoy some free Batman content, fulfilling Epic's pledge to offer at least one free game that's suitable for all ages each week.

After this offer concludes, Epic Games plans to give away free copies of Everything and Metro 2033 Redux for one week. 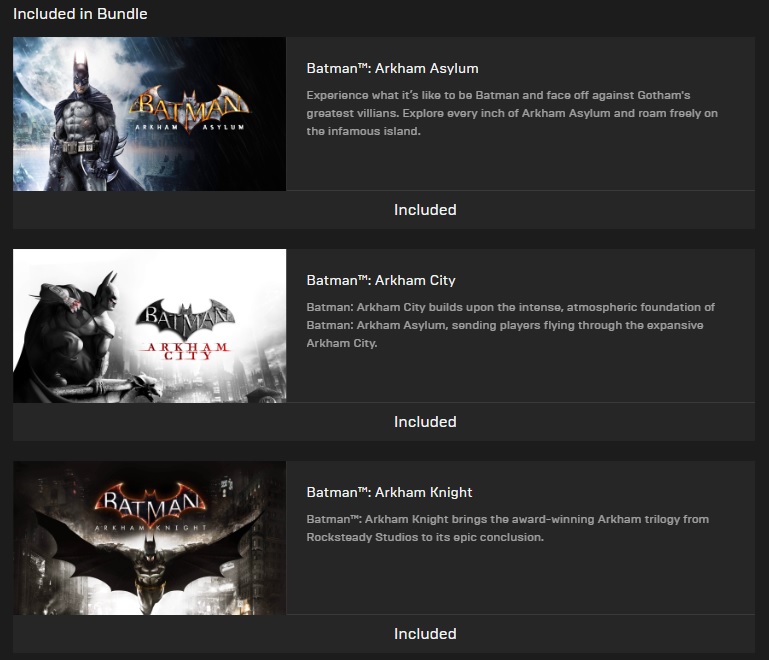 PC gamers can redeem their free copies of up to six Batman games on the Epic Games Store.

You can join the discussion on the Epic Games' Store's free Batman game offer on the OC3D Forums.

Was missing a couple so nice one for that.Quote

NeverBackDown
I'll get them because they are free but not play them because I don't like Batman... Just add more things in my virtual gaming library I'll never play

ImprovizoR
Quote:
You would have to actively dislike Batman not to play these games. They are extremely well made. First game especially. It should be taught in game design class.Quote

NeverBackDown
I just think he's a boring character. Even if the game is great it's still batman I would be playing as and therefore couldn't get immersed.

Edit: I did play an hour or two of one of the earlier games in the collection. Wasn't a fan and all I can remember is forgetting about it within a week and never thought of it again until now.Quote
Reply