Did you favourite game make it onto the list?

Valve has released Steam's annual list of the platforms most popular titles, revealing PC gaming's top earners, the most popular games of each month, best-selling VR releases and most played titles.

Within these lists, Valve has listed Steam's top 10 earners when it comes to gross revenue, which includes titles like H1Z1, DOTA 2, Playerunknown's Battlegrounds, GTA V and Rocket League. To create this list Valve looked at total game sales and well as the sale of microtransactions and DLC. Sadly Valve does not directly rank the games in their lists, ranking games in Platinum, Gold, Silver and Bronze tiers. Below is a list of Steam's top 12 earners.

Valve has also released a list of the most popular new game releases for each month of 2017. This list is based on total revenue, though that has not prevented a large number of low-cost indie titles from making it onto the list. 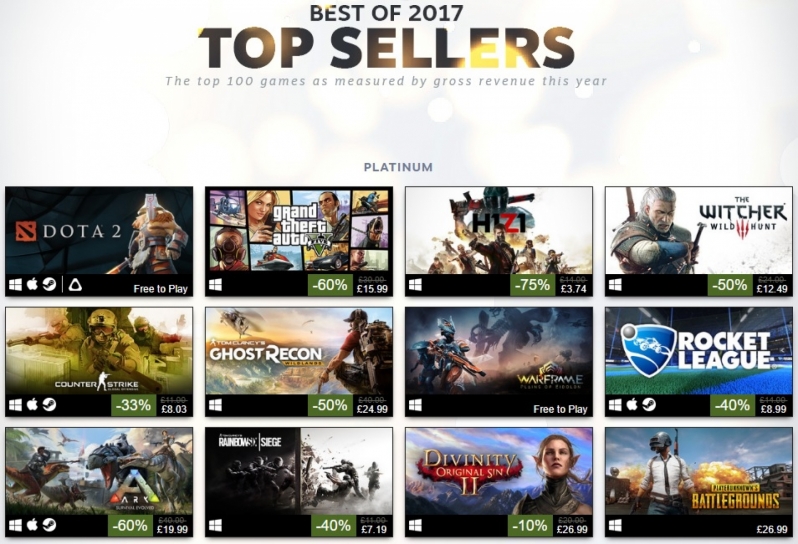 Those who are interested in looking at last year's most popular PC games on Steam can view Valve's five "Best of 2017" lists here.

You can join the discussion on Steam's top games of 2017 on the OC3D Forums.

NeverBackDown
The Witcher 3 still in the best seller list? Wow that's impressive. I feel like everybody already has the game!Quote

Dawelio
Quote:
Neither do I

Stevo
That reminds me, I still have to complete The Witcher 3. Always get to Skellige then loose momentum and grind to a halt.Quote