Valve's Steam platform has grown a lot over the past few years and now Valve has now claimed a new record for maximum concurrent users, now surpassing 14 million concurrent users at peak times.
Right now Steam's peak concurrent Steam user count is 14,370,167, which represents massive growth in the Steam platform over the past five years, with 20122 being the first year where Steam had over 5 million concurrent users. This is a growth of over 9 million users over 5 years, with the companies peak user base becoming three times bigger.
It is worth noting that this is not Steam's peak level of active gamers, with this number only listing how many Steam users are logged onto the Steam client at any given time. At peak times this means that over 14 million people are logged onto Steam, with Steam's minimum number of active users sitting at around 9 million. 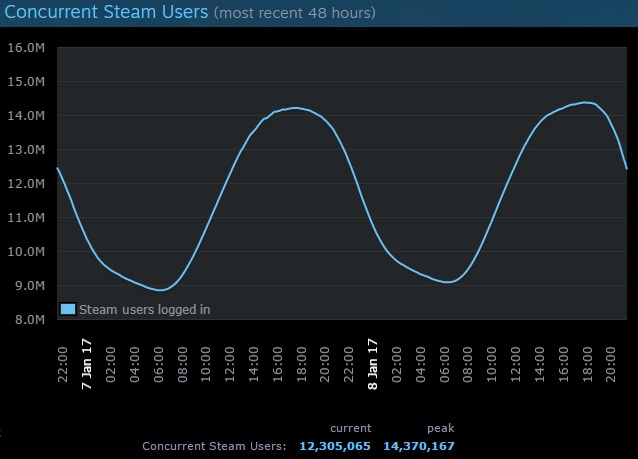 It is clear that the number of PC gamers is continuously growing, with Valve currently claiming to have 125 million active Steam users. It is likely that Steam's userbase will continue to grow in 2017, especially since AMD's Zen CPUs and Vega GPUs have the potential to make PC gaming more affordable with competitive pricing.

You can join the discussion on Steam surpassing 14 million concurrent users on the OC3D Forums.

NeverBackDown
Wish they would report averages per month/year. That way we could see the growth in users and interpret how fast PC gaming is growing.Quote
Reply