State of Decay 2 is set to release next month on May 22nd, launching as a Microsoft exclusive on both Xbox One and Windows PC. So far the game has only been announced for the Microsoft Windows 10 Store as an Xbox Play Anywhere title.

Many PC gamers want to see State of Decay 2 on Steam, just like its predecessor was, though a recent Pax East demo of the title has revealed an error screen which hints at a potential Steam release. This demo was livestreamed on Twitch, though the video in question has since been taken down by Undead Labs.

On the Stream, the following "login failure" message appears, saying that the game is "Unable to connect with Steam" and that players should "Make sure Steam is running, you are logged in, no other instances are running, then restart the game."

On State of Decay's official website, Undead Labs states the following in their FAQ regarding a Steam version of the game "Stay tuned – we’ll have more to share in the future", neither confirming a denying that a Steam version of the game is in the works. Several Microsoft Store Exclusives like Quantum Break and Halo Wars: Definitive Edition have already arrived on Steam, which means that a Steam release post-launch is not out of the question. 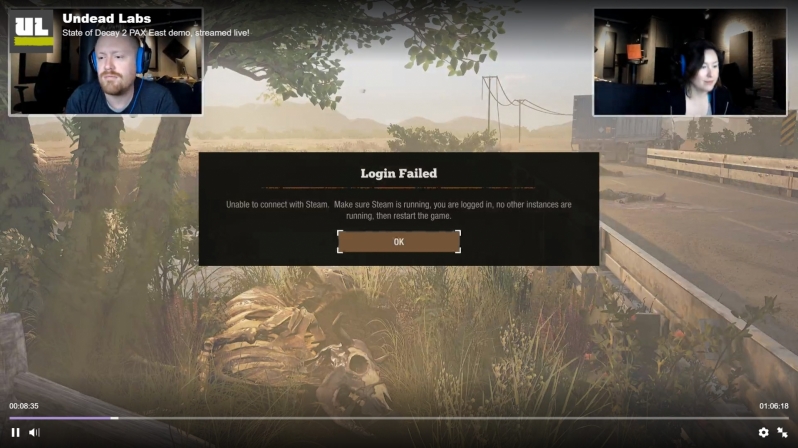 State of Decay 2's PC system requirements have already confirmed that the game can run using the DirectX 11 API, which will allow the game to operate outside of Windows 10, provided the game is made available outside of the Windows 10 Store.

You can join the discussion on State of Decay 2's hinted Steam version on the OC3D Forums.