User feedback fro, the game's benchmark will be used to

When Square Enix released their standalone benchmarking utility for Final Fantasy XV: Windows Edition, users quickly discovered that the tool was filled with issues, issues that shed a lot of doubt on the game's upcoming PC release.

For starters, the tool revealed a lot of visual stuttering, sometimes freezing the game for as long as a second during an initial run of the benchmark, with the game's Nvidia GameWorks heavy High mode delivering the most significant frame time spikes. It has also been discovered that the game also has a lot of level of detail (LOD) problems which force specific information to be rendered in the benchmark regardless of distance or whether the details are shown on screen, having an unnecessary performance impact on systems.

Square Enix has listened to this feedback and has pledged to fix these issues before the full game releases next month, promising a full graphical options menu, fixes the game's LOD problems and changes that will remove the horrible looking stutters that plague Final Fantasy XV's benchmark.

We would like to thank the gaming community for all the feedback on our recently released FFXV WINDOWS EDITION benchmark tool.
Your feedback will help us fine-tune the performance of the game.

We wanted the benchmark tool to approximate the level of visual quality and performance you can expect from your PC environment when running FINAL FANTASY XV WINDOWS EDITION. A Level Of Detail (LOD) issue has been discovered that affects the benchmark scores.

The benchmark also suffers from stuttering; both of the issues will be addressed in the shipping game. While the settings in the benchmark are largely pre-selected for simplicity’s sake, the final game will feature highly customizable settings with On/Off options for a wide variety of settings.

The benchmark will give you an idea of how beautiful the game will be upon release, but for the reasons stated above, the benchmark may not accurately reflect the game’s final performance.

Another issue that is levied at the game's benchmark include problems with the game's implementation of Nvidia GameWorks features, which have a huge performance impact on AMD/Radeon-based systems. We hope that Square Enix will be able to address some of this performance gap before launch, as driver fixes and in-software changes are made within the next month. 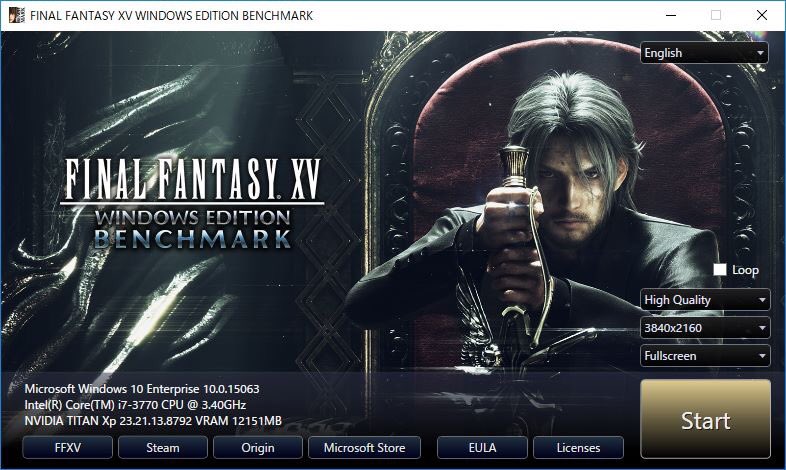 Square Enix reports that Final Fantasy XV's benchmark is designed to showcase an approximation of what the final game will look like at launch and give users an idea of how well their systems will be able to play the title. Final Fantasy XV's standalone benchmark "may not accurately reflect the game's final performance".

The release of this standalone benchmark has brought Nvidia GameWorks back into the spotlight for many PC gamers, acting as a focus of hatred for those who are not satisfied with the benchmark's performance. These issues seem to be problems with Square Enix's implementation of these effects, which leave some hope that the game will run a lot better at launch, though this only gives Square Enix a month to address the game's issues.

You can join the discussion on Square Enix's upcoming Final Fantasy XV's optimisations on the OC3D Forums.