Sony has released an official teardown of their PlayStation 5 console, showcasing the internals of their system while explaining why their upcoming console is so large.

The PlayStation 5 is 104mm wide, 390mm high and 260mm deep, making the console larger than any PlayStation console before it, even their early "Fat" PlayStation 3 models.

The bulk of Sony's PlayStation 5 system allows the manufacturer to utilise a large cooling solution, which uses a 120mm cooling fan to manage the system's thermals while maintaining low operating temperatures. The entire rear of the console acts as an exhaust, while the front and sides of the console act as air intakes.

Once again, Sony has confirmed that they are using an AMD-based chip with Zen 2 CPU cores and RDNA 2 graphics. The system will utilise 16GB of GDDR6 system memory (across 8 chips) and feature an 825GB SSD with a custom controller.

Sony's full PS5 teardown can be viewed below. We have also included some highlights which you may find interesting.

Here is Sony's PlayStation 5 sitting on its side, a feat which is achieved using Sony's custom PS5 stand. This stand supports both horizontal and vertical configurations.

At the front of the PlayStation 5, Sony has included USB Type-A and USB Type-C connectors for easy device connectivity and controller charging. 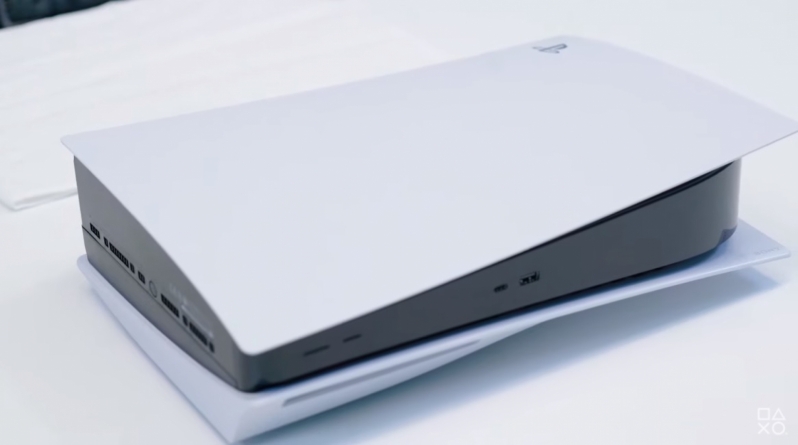 The entire rear of the PlayStation 5 acts as an exhaust for hot air.  It is recommended that PlayStation 5 users keep their system in an area which has access to plentiful airflow. 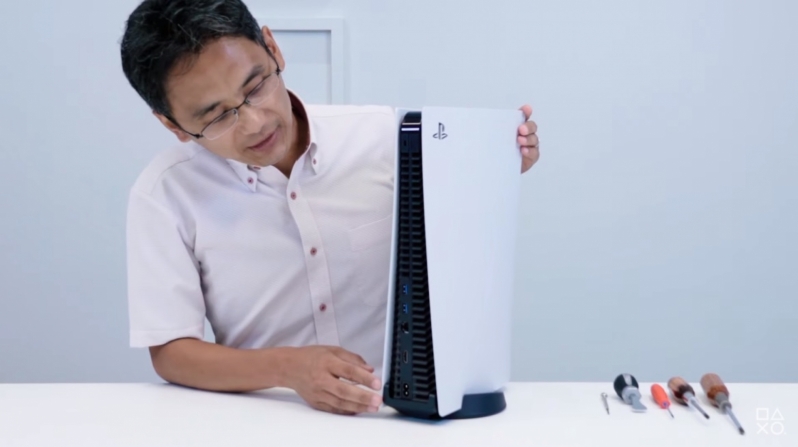 The sides of the PlayStation 5 can be removed without tools, making these plates easy to replace and customise. It is only a matter of time before custom PlayStation 5 sides are release, be it officially or unofficially. 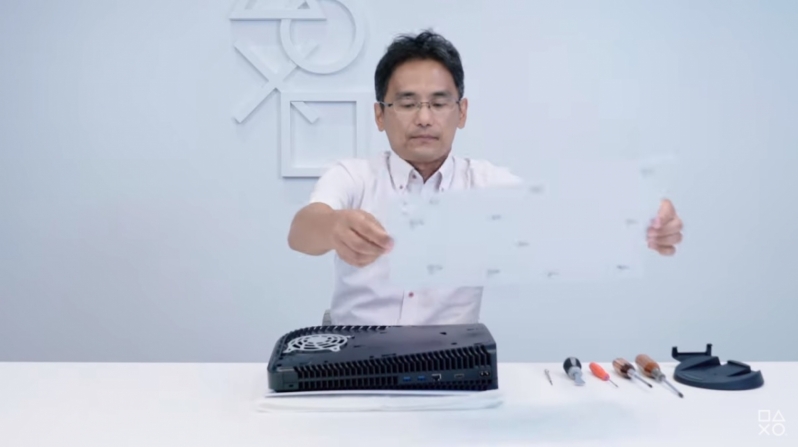 Below we can see the PlayStation 5's 4K Blu-ray drive, which has been custom-made to fit within the PlayStation 5's unique form factor. This addition will not be used with Sony's PlayStation 5 All Digital systems, which offer customers a slimmer form factor and a £90 price reduction. These benefits come at the cost of being unable to utilise disk-based games.

This drive is mounted using two later of insulating material, which should prevent disk vibrations from creating recessive noise during gameplay or game installs. 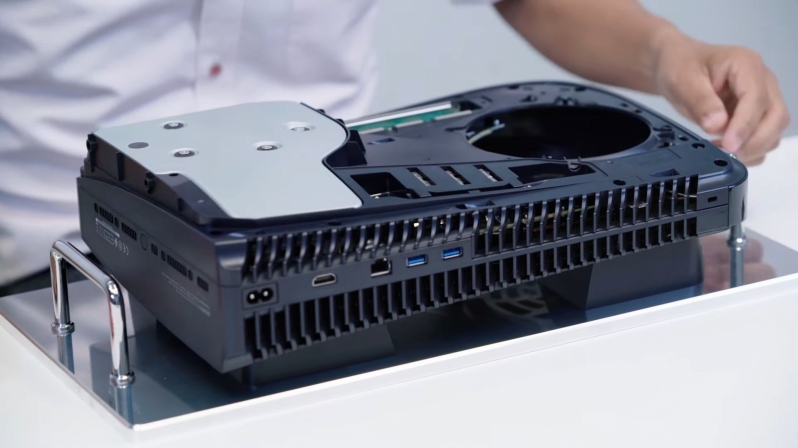 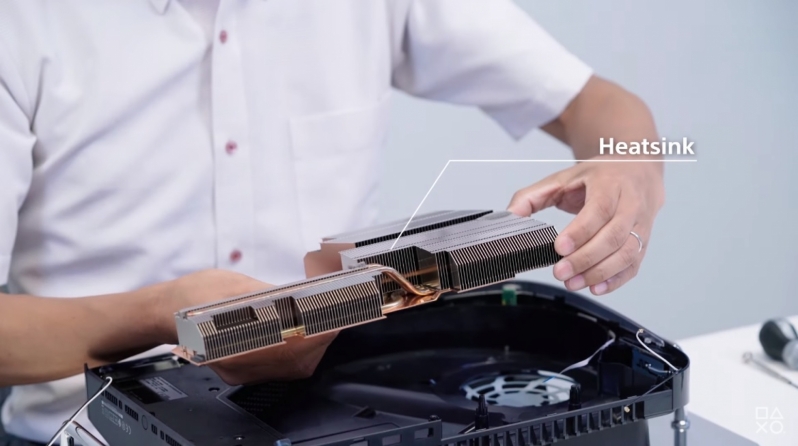 Sony has confirmed that the PlayStation 5 will utilise a Liquid Metal solution as their thermal interface material, as this allows their system to benefit from increased thermal transfer efficiency and a cooler running system. 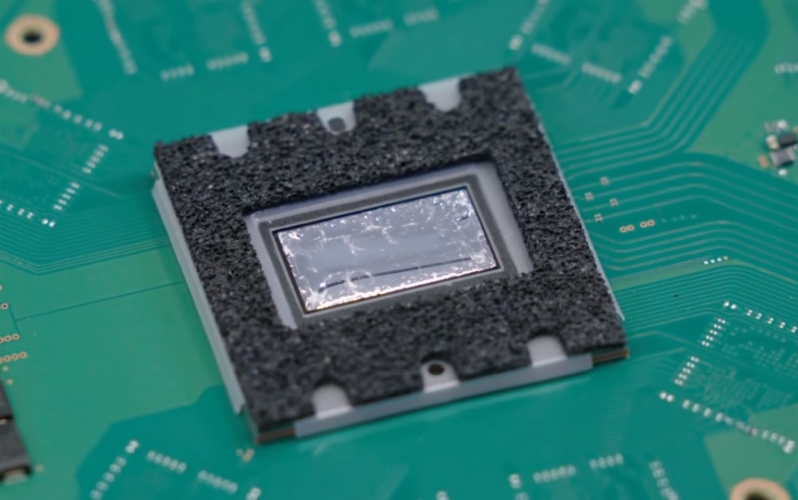 Below is a look at Sony's custom 825GB SSD solution and the company's custom SSD controller. Sony's SSD performance represents a large portion of what makes the PlayStation 5 a true generational leap over PlayStation 4. This SSD solution provides developers with the hardware they need to deliver faster load times and load new assets into games almost instantly 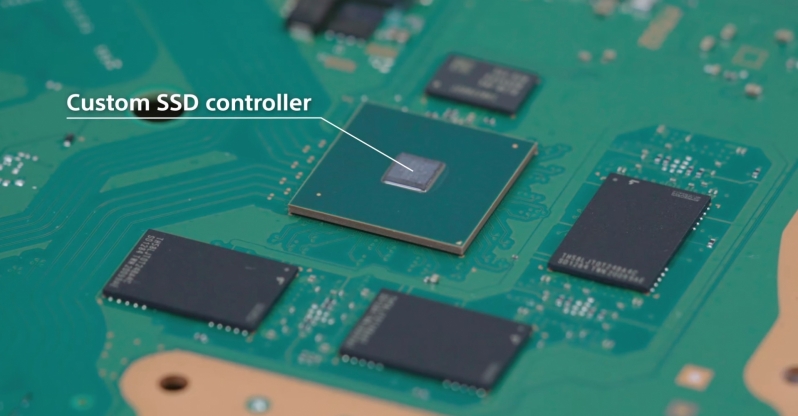 Sony has confirmed that their PlayStation 5 console will use a power supply that's rated at 350W. At this time we do not know how much power the PlayStation 5 will consume under load, though it will be under this 350W limit. 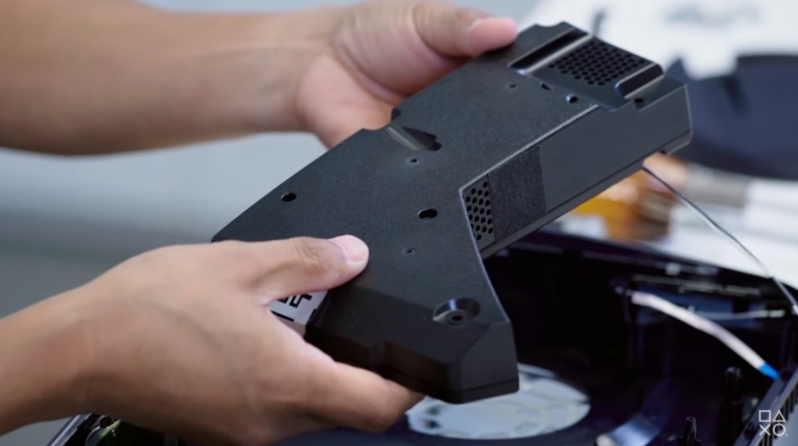 You can join the discussion on Sony releasing an official PlayStation 5 teardown on the OC3D Forums.

trawetSluaP
I'm not an engineer of any sort but looks impressive to me.

Hopefully will be much cooler and quieter than the jet engine that was the PS4.Quote

Dippin-in
Question: Can you play Blu rays film disks on the PlayStation 5 without having to signup for online game/media pass type subscription?

thanks from the ignorant

trawetSluaP
I would certainly say so, you can on PS3/PS4.

You can also play offline games without a PS+ Subscription.

Only online gaming requires you to subscribe to PS+.Quote

Dicehunter
That was pretty cool and the fact they are now using liquid metal TIM is very interesting.Quote

Quattro999
Certainly looks huge unless that guy has a tiny torso!Quote
Reply