Red Dead Redemption 2 on PC is a matter of when, not if

Red Dead Redemption 2 was easily the biggest single player game release of 2018, launching on PS4 and Xbox One to critical acclaim. Since before launch, Rockstar Games' Red Dead Redemption 2 has been rumoured to have a PC version in the works, opening the title to another platform and a significant increase in sales volume.

Now, it has been discovered that a former Rockstar Toronto Physics Programmer called Nan Ma has listed Red Dead Redemption 2 (PS4, XB1, PC) on his LinkedIn profile, hinting that a PC release of the game was planned long before the game's launch. This reference has since been removed from his LinkedIn profile, likely due to the news stories which now surround the profile.

As of yet, 2K Games and Rockstar have not revealed Red Dead Redemption 2 for PC, though given the hardware similarities of gaming PCs, Xbox One and PlayStation 4, a PC conversion of the title wouldn't be a difficult feat for the studio, especially given the developer's stellar work on Grand Theft Auto V for the platform. 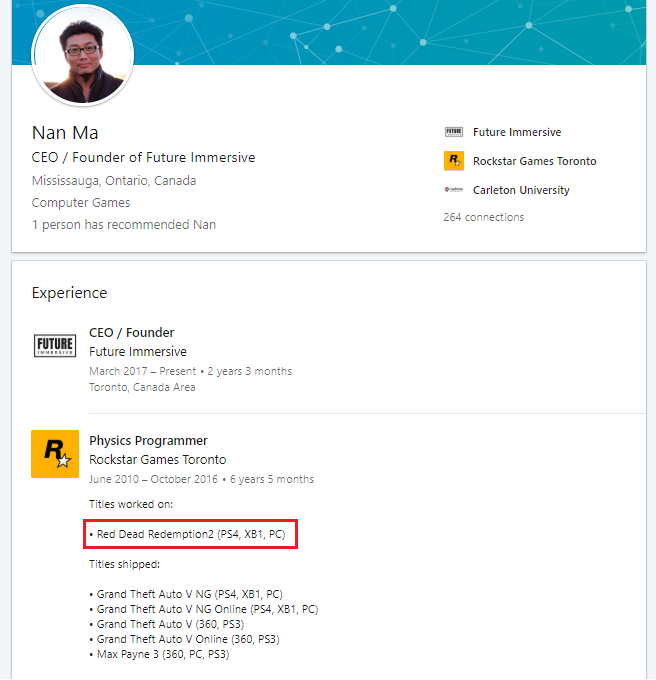 Given the popularity of Red Dead Redemption 2 on consoles, it is hard to see a PC release of the title being anything less than a resounding success, providing gamers with a well-told story while also offering the possibility of 60+ FPS gameplay.

It would be foolish for Rockstar to skip PC with Red Dead Redemption 2, as the studio would be leaving a lot of money on the table by doing so.

You can join the discussion on Red Dead Redemption 2's PC version appearing on a former Rockstar Dev's LinkedIn on the OC3D Forums.

TheF34RChannel
It better not be full release price since it'll be an old game by release time, but yeah I hope it comes out.Quote

NeverBackDown
Epic Games Store exclusive would be hilarious too. Everybody raved about this game on console and then when PC players find out it's an "exclusive" it'll test their limits and make excuses for the many who will cave in.

@F34R it'll be full release price. GTAV was always full price up until like 18 months ago for a 5 year old game.Quote

ImprovizoR
It won't be an exclusive. It must be available on Rockstar's own store, whatever they call it these days. It might be available on Steam as well, since they don't have to worry about their game selling well. Epic would have to bribe them with a ton of money not to release it on Steam.Quote

tgrech
Why would Rockstar give up that 18% extra when they know its going to sell just as well on either store? They've expressed their disdain at the way Valves run things before, all the extra systems required to release on their platform, I wouldn't be surprised if this wasn't on Steam now developers have choice on the matter.

The user base is now essentially equal in size, but one store offers to work closer with you, allow better integration, and gives you 25% more money from your sales. The only one who'd have to bribe here is Valve surely?

It's worth noting, Epic "exclusives" doesn't mean its only sold on the Epic store. These exclusives are done in a coalition of more or less all the PC gaming stores atm with heavy integration with developers own stores. It's literally, just not Steam, because its problematic.Quote

Warchild
Quote:
yeah coalition deals are still considered exclusives.
Fact is that Epic could have exclusivity rights over all other competitors.


Quote:
Thats still considered an exclusive deal "if" it shows on a 3rd party store and only that store.

But many people are forgetting that RDR2 didnt make the sales they expected. And the reviews are quite mixed on this one. I don't think its going to sell as well as you all think.Quote
Reply