Why is Rockstar marketing a launcher?

- Update - Red Dead Redemption 2 has now been officially announced for PC and Stadia.

For a limited time, Rockstar Games will be giving away free copies of Grand Theft Auto San Andreas away for free on PC through the company's "Rockstar Games Launcher", which is available for users of Windows.

Rockstar markets their launcher as supporting features like cloud saves, and Automatic updates, with the company's imagery showing that the launcher can run games like Grand Theft Auto V, L.A Noite, and Bully: Scholarship Edition. The big question now is this, why is Rockstar trying to build a playerbase for a new games launcher? The answer... is probably Rockstar's long-rumoured PC version of Red Dead Redemption 2.

Logging into Rockstar's new game launcher will require a Rockstar Social Club account, which is something that every player of GTA V's PC version should already have.

Rockstar's Game Launcher is available to download here. This offer will be available until October 8th. 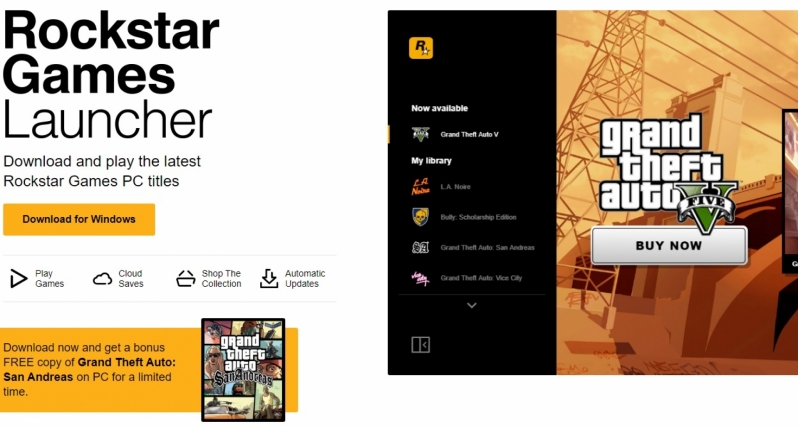 You can join the discussion on Rockstar's game launcher and free GTA: San Andrea Promotion on the OC3D Forums.

ImprovizoR
It was obvious for a while with all those code leaks. I can't wait for the official confirmation, though.Quote

NeverBackDown
Your source link is not working. Just heads up.

Not sure if I wanna download another launcher for a game I won't ever play... but its free sooo...

Daiyus
To be honest, there's so many now I had no issue downloading this last night.

To my surprise there's some nice QOL improvements for me with it. I bought GTAV on disc (one last attempt at supporting physical copies), but could download a web installer as well. The problem was that I don't play the game often any more, which meant the game only tried to update when I launched it; kind of annoying.

This new launcher recognises the install and now replaces that old web-installer/discs, and it it'll keep the game up to date in the background just like Steam/Uplay/etc. The free copy of San Andreas is nice bonus, if I ever bother to play it. If RDR2 does come to PC I'll definitely want to play it at some point, and that'll require this launcher, so I guess I'm just staying ahead of the curve.Quote

WYP
Quote:
The link has been fixed now.Quote
Reply