Rockstar Games has officially confirmed that the company has suffered from a "network intrusion" and that footage of their "next Grand Theft Auto" game has leaked as a result. Currently, Rockstar and Take Two Interactive are actively taking down this leaked footage, and Rockstar does not expect this leak to affect the development of their "next Grand Theft Auto" long-term.

Rockstar has stated that they will officially reveal their next Grand Theft Auto game "when it is ready", and that they want to create a game that "exceeds your expectations". Currently, Rockstar does not expect their data network breach to impact their live service games, which includes Grand Theft Auto Online, and Red Dead Online.

Below is Rockstar's statement about their data leak and their "next Grand Theft Auto". 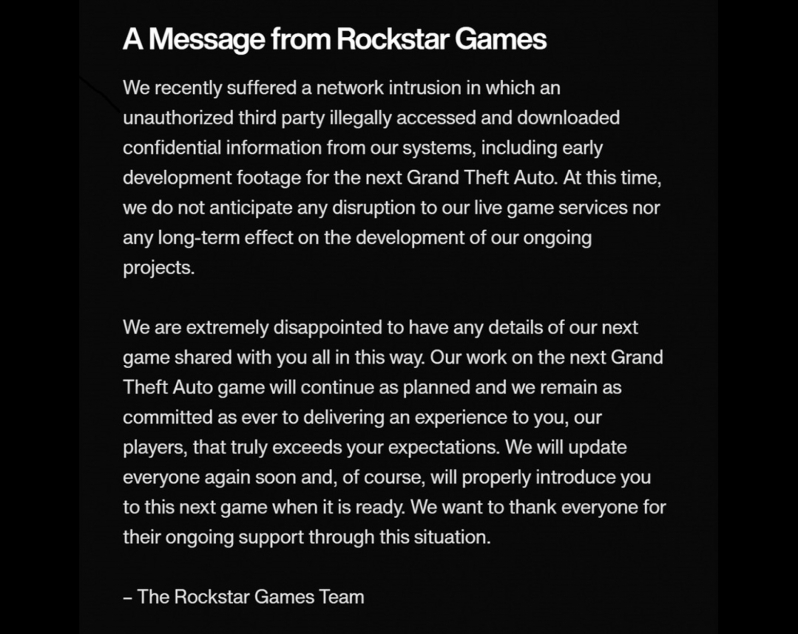 You can join the discussion on Rockstar's statement regarding their data breach and GTA VI leaks on the OC3D Forums.

Damien c
They are also having Copyright Stikes issued on channels that show the footage according to a couple of people I follow on Twitter.

1 person has said that they asked for the strike to be removed after deleting the video, which is something you can do if you can contact the copyright holder, but they have declined to remove it.

Also hitting Twitter and other places with Takedown's as well.Quote

AngryGoldfish
Am I the only one who finds it ironically funny that a company best known for making a game about theft and coercing its customers into wasting money via micro-transactions is now sad that they've been robbed?Quote

AlienALX
Quote:
hah ! I've been having a good chuckle about this since yesterday. Watching videos of their trained woke sheep on Youtube.

"But what if it damages R* and they don't launch GTAVI?"

"But what if they decide not to release because of this?"

Man people are soooo dumb. It won't hurt them AT ALL as history has shown. HL2 leaked before launch, one of the biggest selling games of all time. So did Doom 3, didn't hurt sales one bit. Like after spending millions a company is going to throw their toys from the pram and not release a game

Doesn't surprise me they are throwing their weight around. That said, it does kind of serve people right using something like this as news and earning money from the views etc.

Oh and Crysis 2 leaked too. In an almost complete state (the sounds had not been allocated properly yet).Quote

AngryGoldfish
Quote:
Totally agree. I can't see how this will hurt GTAVI sales. There would have to be WWIII to slow down GTA sales.Quote