But can it run Crysis? No, probably not...

By the late 90s, 3DFX experienced a rapid decline, with Nvidia eventually acquiring the GPU maker in late 2000 to access the company's IP. In fact, 3DFX is where Nvidia got the term SLI from, a feature which was originally part of Voodoo series graphics cards. It's amazing that Nvidia still markets multi-GPU support as SLI, as the acronym used to stand for "Scan-Line Interleave". Yes, Nvidia did change this acronym to "Scalable Link Interface" when they re-introduced the name in 2004, as Nvidia's tech has nothing to do with scan lines and instead relies on a technique called Alternative Frame Rendering.

Part of the appeal of PC building is working with both old and new hardware, with enthusiasts exploring new boundaries and playing with hardware that would be considered ancient by today's standards.

What we have for you today is a PC build from Ross Tregemba, who has combined eight Voodoo 2 chipsets in SLI to play Valve's Half-Life, utilising Quantum3D Obsidian 2 200SBi hardware, rare PCBs which contain two Voodoo 2 chipsets.

By Frankensteining these chipsets together, Tregemba was able to get Half-Life to run with a respectable framerate, though it is worth noting that two of these old graphics cards required extensive repairs before they would function properly. These old graphics cards were allegedly used for "military simulation" in their previous life. 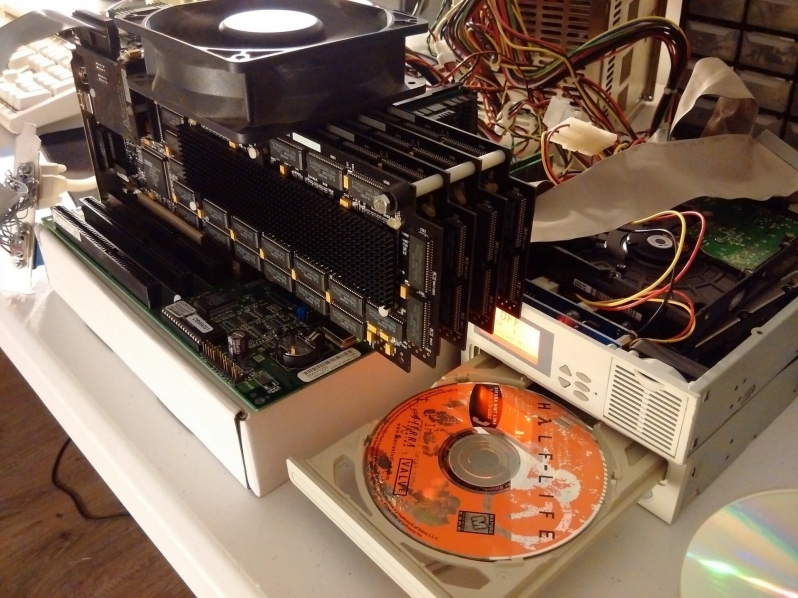 In the video below, Tregemba's "brick" is used to run the opening sequence of Half-Life, with the builder planning to release more retro gaming videos in the future using his unique GPU configuration.

Back in the era of 3DFX, a system with this many Voodoo 2 graphics cards would have been unheard of, with the system acting as a unique look at what was possible during a different PC gaming era. "Having something like this was only something I thought was possible in dreams.." said Tragemba in a recent forum post.

You can have a look at Tragemba's hardware journey over on the HardOCP forums, where he posts under the username TheeRaccoon.

You can join the discussion on the PC gamer who merged eight Voodoo 2 graphics cards together to play Half-Life on the OC3D Forums.

Warchild
I had voodoo2!!!

bundled with half life and Tonic trouble. Actually it was the brand Guillermot who you you might recognise nowadays as... Ubisoft

grec
Quote:
Technically NVidia changed the acronym to "Scalable Link Interface" when they reintroduced the concept in 2004 since it then predominantly used Alternate Frame Rendering which is of course a very different approach (Original Voodoo SLI was a form of SFR as you can probably guess from the name).Quote

WYP
Quote:
You are right. I have updated the article to clarify things. Thanks for the info.Quote

AlienALX
I played this through originally on a Voodoo 2.Quote

Bagpuss
Some people really do have too much time on their hands...Quote
Reply