Remedy's Control is due to release on August 27th on the Epic Games Store, and before now the game's PC system requirements were shockingly high, asking for an RX 580 or GTX 1060 as a minimum graphics card. For context, that's equivalent to asking for a PS4 Pro level graphics card.

Now, Remedy has come to their sense and have released revised PC system requirements for their game, shifting things down to more reasonable levels. Given the fact that this game is designed to run on both consoles and PC, it makes sense that the PC version of the game can run on much lower-end hardware than what was previously recommended.

Control's PC version will be able to run with some fairly modest PC components, requiring a minimum of an R9 280X graphics card or a GTX 780 (both of which are 3GB graphics cards), 8GB of system memory and either an i5-4690 or AMD FX 4350 processor. These system specifications sit far below the game's original PC system requirements.

Remedy recommends that PC gamers play Control on beefier hardware, such as AMD's Ryzen 5 1600X or Intel i5-7600K processor and graphics cards like AMD's RX 580 or Nvidia's GTX 1060/1660. If gamers want to enable raytracing, Nvidia's RTX 2060 or higher is recommended. Control will support both DirectX 11 and DirectX 12, with DirectX 12 being a requirement for raytracing. 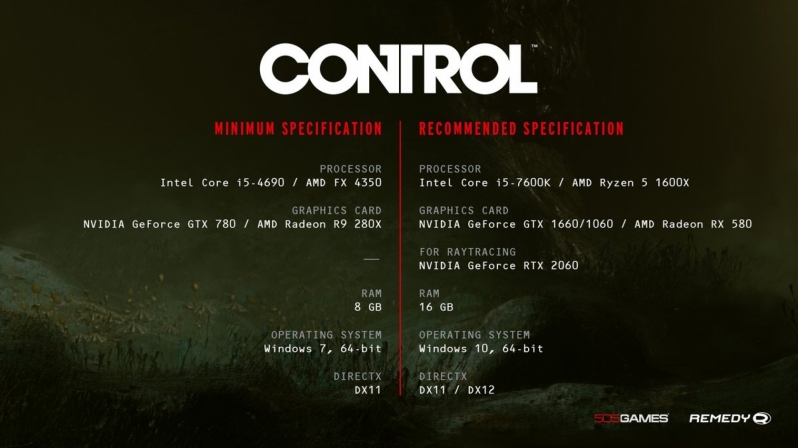 Below are both the old and new PC system requirements for Control. Control will release as an exclusive on the Epic Games Store.

You can join the discussion on Control's PC system requirements on the OC3D Forums.