Windows 7 may be outdated, but it's a push that the gaming community needs.

Last night, we reported on Microsoft porting DirectX 12 to Windows 7, an unprecedented move which would enable the new API to function on Microsoft's most popular legacy OS.

Ever since Windows 10's launch, DirectX 12 has been exclusive to the new OS, acting as a reason for gamers to upgrade. Sadly, this strategy has not worked, with developers seeming reluctant to adopt the new API early on while many early DirectX 12 games offered less performance than their DirectX 11 counterparts.

In effect, developers are forced to offer both DirectX 11 and DirectX 12 versions of their games, assuming that they want to support DirectX 12 in the first place. This, in turn, splits development resources between both APIs, leading to a situation where one API inevitably gets more love than the other. Creating games with DirectX 11 in mind also makes it difficult for DirectX 12 to be fully exploited, again thanks to limited developer resources. Ideally, modern games will be designed with one API in mind, allowing developers to focus on optimisation and in-game performance.

Over the past year, the only example of a DirectX 12 game that doesn't offer a DirectX11 fallback layer, that we are aware of, is Rebellion's Strange Brigade. That said, while DirectX 11 isn't an option for that game, Vulkan is, acting as an API backup that functions on Windows 7. It may not be DirectX 11, but Vulkan serves the same purpose by offering backwards compatibility.

So why has DirectX 12 been ported to Windows 7, an OS that is set to fall out of its extended support in less than a year? Easy, if DirectX 12 is supported on Windows 7, game developers gain the ability to abandon DirectX 11 and fully commit to Microsoft's low-level API.

The fruits of this labour are already getting seen in the wild, with World of Warcraft's latest update adding DirectX 12 support to Windows 7, enabling increased multi-threading performance to deliver higher framerates to their players. 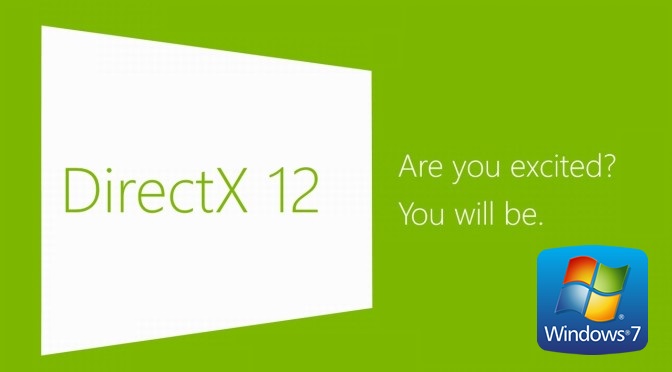 Moving forward, Microsoft plans to work with more game developers to enable their existing DirectX 12 games to work on Windows 7, though the company has noted that Windows 10 contains several "critical OS improvements" that allow low-level APIs to become more efficient.

By bringing DirectX 12 to Windows 7, Microsoft has made it easier than ever to adopt their latest API, pushing them to make use of low-level optimisations and new graphical features that are only possible on DirectX 12.

Ideally, Microsoft should have added DirectX 12 support to Windows 7 years ago, but this change marks a huge step away from company norms. Instead of maintaining DirectX 12 as a Windows 10 exclusive feature, Microsoft has opened things up to make the lives of both consumers and game developers easier, which makes sense given the company's renewed focus on both PC and console gaming.

You can join the discussion on why Microsoft Porting DirectX 12 to Windows 7 is a genius move on the OC3D Forums.

tgrech
While I do agree somewhat I think if they really cared about that they would have ported it back when Windows 7 had >50% marketshare not too long ago rather than now when it's been in free fall for a while, has around half of the users of Windows 10 on Steam and now only really still has a stronghold in markets like China with even these markets deep into the sharper transition western markets saw over the last 18 months. Personally I don't think the existence of DX11 in modern games is entirely down to Windows 7, many people still have Kepler based hardware that doesn't play nicely with DX12 at all while even Maxwell generation hardware is particularly well optimised for the HLSL style APIs and Pascal only got as far as not having a massive penalty from many low-level API features compared to the well optimised HLSL driver stack, with few benefits from the low-level approach on any NVidia hardware until Turing. While we're now starting to see good implementations of DX12 that improve CPU use and such, creating a good DX12 implementation in a game is orders of magnitudes more work that for a comparable DX11 one, and it made sense developers had to take time to optimise those implementations well especially when most PC gaming hardware didn't really suit it yet.
Around 70% still use NVidia hardware that will gain little to no benefit from a low level API, or around 3 times more than those limited from using DX12 as a result of their OS, personally I think the the significant improvement in DX12 libraries and work done on them recently has been a major contributing factor to its viability as this is what will allow many developers to practically use the API, and if it weren't for the consoles there's a good chance we'd have never really seen DX12 go anywhere at all as NVidia could have dug their teeth in with their own quite contrasting design philosophy.Quote
Reply