Ubisoft has released its Q1 2019/20 Financial report, confirming that PC is now the company's top platform in terms of "net bookings", accounting for 34% of the company's business, exceeding PS4's 31%.

Part of this success comes from the continued success of Rainbow Six: Seige, which remains popular on PC, alongside titles such as The Division 2 and Assassin's Creed Odyssey, all of which have solid PC versions.

At the end of Ubisoft's 2018/19 financial year, Ubisoft stated that PC sales were up 79% year over year with UPlay generating 27% of the company's revenue when compared to 18% the previous year. Today, PC is a bigger earner for Ubisoft than PS4, showcasing the strength of the platform.

With the release of The Division 2, Ubisoft has seen UPlay sales for the franchise increase by a factor of 10x when compared to the series' previous outing. This is due to Ubisoft's partnership with Epic Games, which prevented the game's release on Steam, moving PC gamers to alternative storefronts where the publisher could benefit from an increased revenue share. High Season pass sales have also contributed to Ubisoft's sales growth on both PC and consoles. 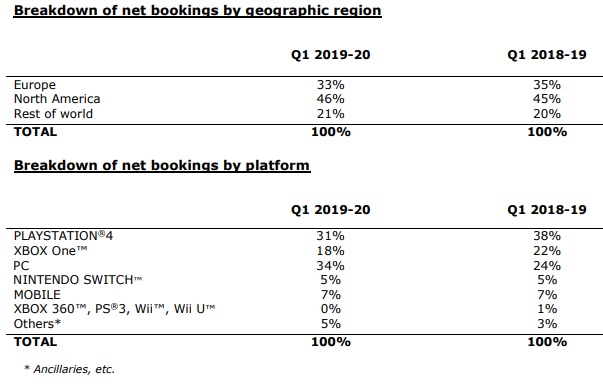 When compared to Q1 of 2018/19, PC takes up 10% more of the Ubisoft sales pie, an increase that's larger than the Nintendo Switch's total sales. PC has become a major part of Ubisoft's business, which is great news for PC gamers, as it means that more focus will be placed on the PC versions of future titles.

A message has been sent loud and clear to Ubisoft's management, and that message is that PC matters.

You can join the discussion on Ubisoft's strong PC sales on the OC3D Forums.

NeverBackDown
Damn any other financial information? I'd be interested in $ amounts.

Also AC: Odyssey was a fantastic game and I see it all the time with 20-30k people playing on Steam alone every day. Not surprising it's making them good money. I played on PS4 and got the platinum trophy. Lovely game.Quote

AngryGoldfish
Good to hear. In many ways it's the way it should be. Consoles are more likely to be the future in my opinion, but PC right now should be the best, most consistent, most popular way to game.Quote

NeverBackDown
Quote:
I disagree they are the future. The future is streaming at this rate. It'll be another 5 years before it's a serious alternative though.Quote
Reply