Not bad, given Steam's marketplace dominance.

Cyberpunk 20177 is easily one of 2020's most highly anticipated games, releasing on PC, Xbox One and PlayStation 4 as the next major RPG release from CD Projekt Red, the creators of The Witcher 3: The Wild Hunt.

CD Projekt Red has confirmed that GOG, a lesser known PC games retailer that specialises in DRM-free gaming, has succeeded in receiving approximately one-third of digital PC pre-orders for Cyberpunk 2077, acting as a huge win for the storefront. The game's remaining digital pre-orders come from Steam and the Epic Games Store, with the bulk of the Cyberpunk 2077s pre-orders likely coming from Valve's Steam platform.

GOG is owned by the CD Projekt Group, and as such acts as CD Projekt Red's PC retailer of choice, as all proceeds from Cyberpunk 2077 will go to the company behind the title. To further incentivise these purchases, CD Projekt Red is also giving GOG purchasers exclusive access to print-quality Cyberpunk 2077 posters, an exclusive digital booklet about the game and an additional set of wallpapers and avatars.

Despite Steam's dominant position within the PC gaming market, it seems that a large number of PC gamers are willing to side with GOG when purchasing Cyberpunk, with the promise of better developer funding and DRM-free gaming being major draws for the platform. 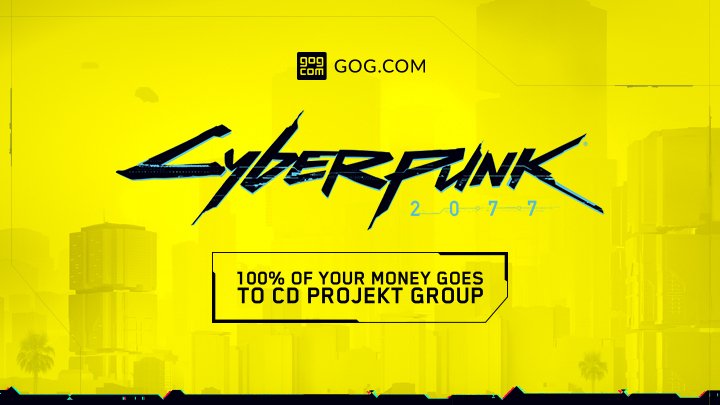 At this time it is unclear how many copies of Cyberpunk 2077 have been pre-ordered on PC or other platforms, but given the hype surrounding the game, pre-order numbers are likely to be high.

You can join the discussion on one third of Cyberpunk 2077's pre=orders being on GOG on the OC3D Forums.

NeverBackDown
It's only because it's CDPR making the game tbh. Everybody worships them. Nobody else could get the people to rally to them this way.Quote

cooperman
Quote:
No its because gog sells DRM free copy's.Quote

NeverBackDown
Not even that is worth mentioning. Witcher 3 sold far far more on Steam even when GOG was around. It's simply because it's CDPR and the Witcher 3 put them on the map basically for many people. I'm not bashing on them, CDPR is my favorite company and they made my favorite game of all time. I'm just not a blind fanboy.Quote

Warchild
Quote:
You are a clear Witcher fanboy though

I love CDPR. If all companies were like them, the gaming community would thrive so much better.Quote

NeverBackDown
No idea what the answer is. Like I said the only reason this has worked is because of the W3 and it put them in the map. It's the only reason people God forbid used a 2nd launcher that wasn't steam and didn't complain about it.

They play marketing very well. They don't do anything until some controversy comes up or they will take a known gamer per peeve and not do it. It's worker out for them. Very smart tbh. Plus they make good games so they can deliver on their promises.Quote
Reply