Huge capacity at a low price

Modern PCs benefit greatly from having a large amount of SSD storage, especially if you are a gamer or a creator. While HDDs remain the price/GB king, SSDs offer faster OS/application loading times, and can often make a PC feel snappier during use. Beyond that, most modern games and creator software's now explicitly recommend SSD storage, as the performance of HDDs are often slow enough to give users sub-par user experiences.

Today, we have an NVMe bargain for you. A 2TB NVMe SSD for under £110. Yes, this SSD may not be the fastest on the market, but it is plenty fast for most use cases and it offers a lot of storage for a very reasonable price. Many higher-end SSDs cost more than this for 1TB of storage, and you'd be lucky to find a 2TB SATA SSD that's much cheaper.

Presenting Crucial's 2TB P3 SSD, a PCIe 3.0 drive that offers users sequential read/write speeds of up to 3500MBps/3000MBps. This SSD promises users performance levels that are up to 45% higher than their prior generation P2 SSDs, SSDs that were well known as great value NVMe drives when they launched.

While this SSD is not fast enough to act as a PlayStation 5 SSD, this drive is much faster than the SSDs used within Microsoft's Xbox Series X/S consoles, so gamers can rest assured that this SSD is fast enough for current-generation games. This SSD offers solid PCIe 3.0 performance, maxing out the interface's potential speeds with its 3500MBps sequential write speeds. 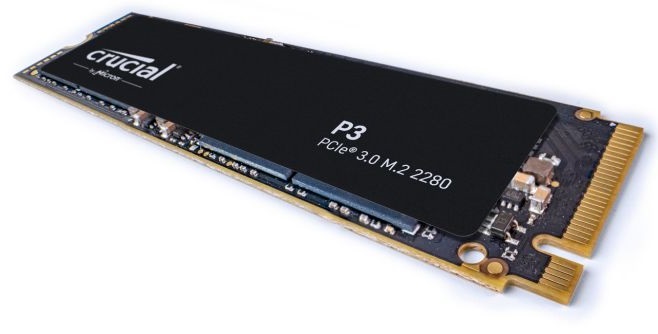 If you want a lot of SSD storage with low pricing and ample levels of storage performance, Crucial's P3 SSDs are worth considering. They may not be the fastest, but they are more than fast enough for most workloads, and the capacities that these drives offer at these prices are incredible. If you need a large quantity of SSD storage, Crucial's P3 series are incredibly appealing.

Drebin
It's £82 direct from Crucial:-