System latency can be reduced by up to 30%

Over five years after launch, Ubisoft's Rainbow Six Siege remains an incredibly popular shooter on PC, and hardcore fans of the game are looking for every advantage possible to make the game look and feel better to play on PC.

With Nvidia's help, Ubisoft has integrated Reflex into the Vulkan version of Rainbow Six Siege, a technology designed to enable increased system responsiveness on Geforce 10 series and newer graphics cards. Through Reflex, Geforce GPU users can achieve up to a 30% drop in in-game latency, allowing Rainbow Six Siege to feel more responsive.

Gamers typically achieve lower latency levels by increasing the framerate of the games they play, acting as one of the major perks of high refresh rate gaming. This is one reason why high refresh rate 144Hz, 240Hz and 360Hz monitors exist. Nvidia's Reflex technology is designed to deliver similar benefits, not by creating and displaying frames at a faster rate but by synchronising CPU/GPU workloads to eliminate unnecessary lag.

Below is a video where Ubisoft questions Nvidia's Seth Schneider on the company's Reflex technology.

In the chart below, Nvidia showcases the benefits of their Reflex technology on Rainbow Six: Siege's Vulkan version on an RTX 3080, RTX 2060 Super and GTX 1660 Super when the game is running at 1440p on a 144Hz monitor with an i9-10900K processor.

Here, we can see that the largest latency benefits are seen on lower-end graphics cards, which makes sense given the amount of additional CPU headroom that such a system had. The more CPU performance headroom you have, the more room Nvidia's Reflex technology has to work. With an RTX 3080, Nvidia Reflex still delivers performance benefits, but the high framerates offered by the graphics card leaves a lot less space for Nvidia Reflex to deliver larger latency benefits.

If you are a player of Rainbow Six Seige that own a compatible Geforce graphics card, the addition of Nvidia Reflex to the game should come as great news for you. After updating your drivers and enabling Reflex, Rainbow Six Siege should feel more responsive, and that should help you take down your opponents a little bit faster.

You can join the discussion about Nvidia's Reflex technology coming to Rainbow Six Siege on the OC3D Forums. 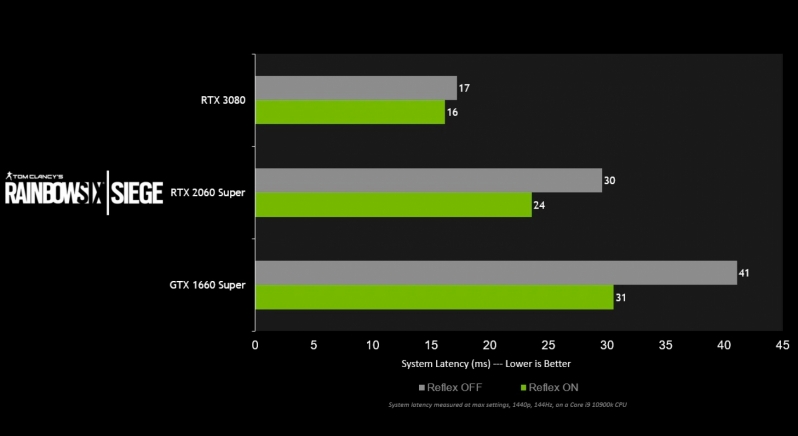 NeverBackDown
Haven't played in while but can't wait for this and jumping back in. Finally my old 1080 gets a new feature

NeverBackDown
It's on the live server already. Tried it out a bit ago. I feel like it's a noticeable improvement. Looking around you don't notice it much but quick snapping feels more accurate. At least in my limited testing.Quote
Reply