Someone released the data from Nvidia's DLSS Reviewers Guide

Within Nvidia's reviewers guide for Death Stranding, the company released a selection of benchmarks for the game using its RTX and RTX Super series products. This data confirmed that every RTX graphics card is capable of running Death Stranding at 4K 60+ FPS on PC when using DLSS. This fact makes DLSS a real killer feature for Nvidia's graphics cards.

Andreas Schilling, the editor of HardwareLuxx published the contents of Nvidia's reviewer's guide on Twitter, and we have confirmed the validity of these slides internally. PC reviewers of Death Stranding currently aren't allowed to publish detailed performance data, making Nvidia's slides the only data that we can publish. Beyond that, we are unsure if the contents of Nvidia's latest DLSS documentation is allowed to be shared. Thankfully for us, the contents of these slides have already been published by a 3rd party.

At 1080p, we can see that DLSS 2.0 can have a large performance impact on Death Stranding, but not as much of an impact as what can be seen at higher resolutions. Not bad given DLSS 2.0's proven quality in games like Mechwarrior 5: Mercenaries and Control. 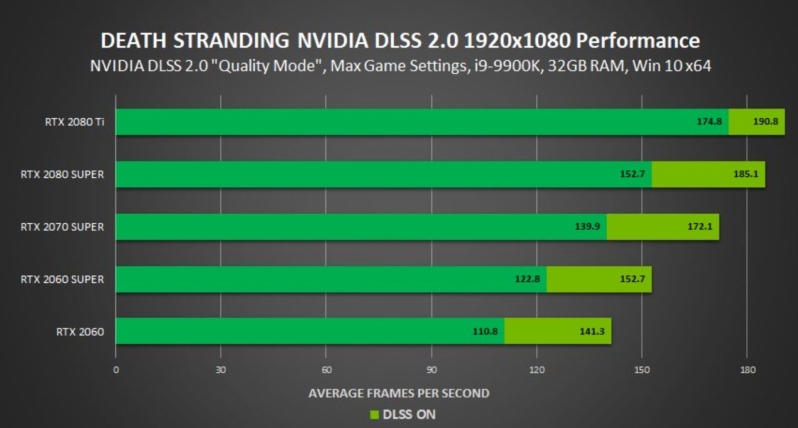 When resolutions are cranked to 1440p, DLSS 2.0 is enough to make 100+ FPS framerates a breeze on RTX series graphics cards. This is great news for fans of high-refresh-rate gaming, especially after considering the fact that Death Stranding runs at 30 FPS on PlayStation 4. 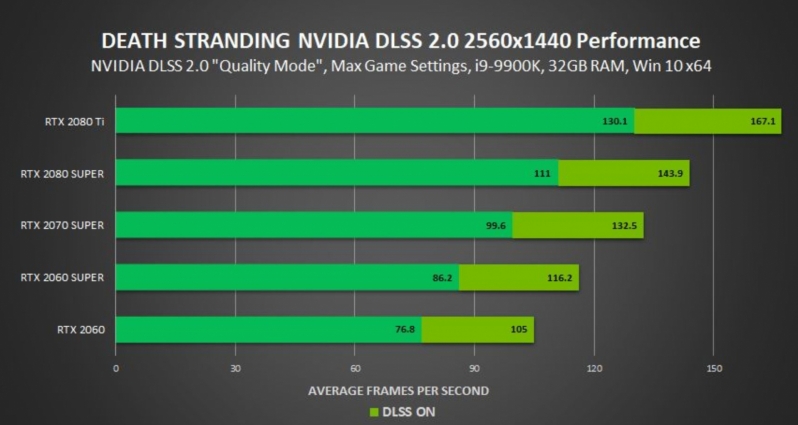 At 4K, DLSS 2.0 in "Quality Mode" is able to allow the entirety of Nvidia's RTX series to run Death Stranding with average framerates of over 60 FPS, even the relatively affordable RTX 2060. DLSS 2.0 typically also has a "performance mode" on PC, which means that larger performance enhancements should be possible, though this performance will come at the cost of quality.

You can join the discussion on Death Stranding's RTX/DLSS performance on the OC3D Forums.

ET3D
At least according to Ars Technica, AMD's FidelityFX beats DLSS for both performance and quality in this game.Quote

WYP
Quote:
We will have to wait and see. The review embargo for that game doesn't allow people to showcase screenshots.

Unfortunately, we haven't been given early access to Death Stranding, but we will be looking into this at launch.Quote
Reply