Outside of hardware accelerated ray tracing, the most noteworthy feature of Nvidia's RTX series graphics cards is their support for a feature known as DLSS, which utilises the power of machine learning to upscale images to deliver a similar experience to native resolution rendering while providing increased performance levels.

On February 12th, Battlefield V will receive an update on PC which will enable DLSS support on the platform, though at the time of writing this feature is only accessible on Nvidia RTX series graphics cards, such as the RTX 2060, RTX 2070, RTX 2080 and RTX 2080 Ti.

When compared to TAA, which is commonly used in most modern PC games, DLSS can often provide sharper images, allowing games to both look better and deliver greater performance levels. This is great news for anyone who wants a great balance between performance and graphical quality.

Nvidia creates their DLSS algorithm using a supercomputer, which uses rendered frames at standard display resolutions and ultra-high resolutions (16K+) to create a deep learning algorithm which can upscale rendered frames on the fly. In the case of Battlefield V, DLSS will provide enough of a performance upgrade to counteract the performance impact of the game's real-time raytraced reflections.

Over time Nvidia will be able to improve their DLSS algorithm by adding more data to their supercomputing workloads, allowing the performance gains offered by DLSS to increase or for the graphical quality of DLSS to be increased. 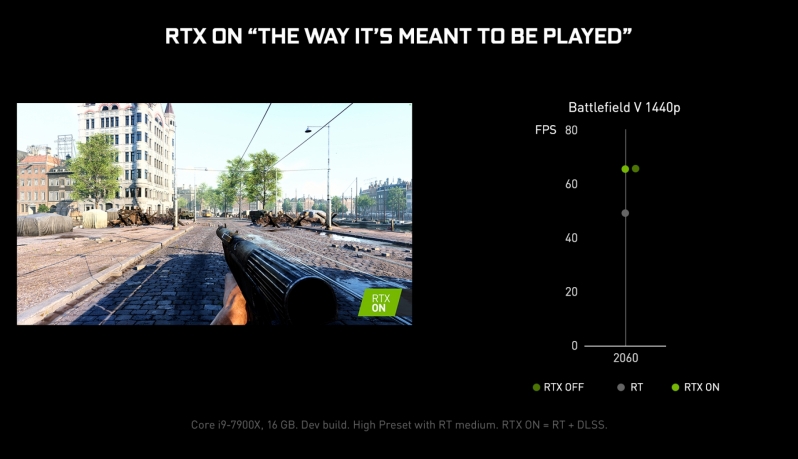 Battlefield 5's next update will also bring the game's 4-player co-op Combined Arms mode into the game, which will allow players to challenge the game's AI across eight unique missions, each of which spans four objectives across a variety of maps.

So far DLSS has been used in Final Fantasy XV and 3DMARK Port Royal, showcasing high levels of image quality and notable boosts to in-game performance. We look forward to seeing what kind of impact DLSS has on Battlefield V, both in terms of graphical fidelity and performance.

You can join the discussion on Nvidia's DLSS tech coming to Battlefield V on the OC3D Forums.
«Prev 1 Next»

Kaapstad
Would be nice if they could get SLI working in the game.

It can't be that difficult if you can use RTX, DLSS and SLI in the Port Royal bench.Quote

WYP
Quote:
Yeah. It is strange that they do not have DX12 Multi-GPU working yet. I know it's uncommon, but DICE takes a lot of pride in their engine and its features, very strange that that doesn't extend to multi-GPU in DX12.Quote

tgrech
I think that's because multi-GPU only really applies to a single graphics card of the most recent models and therefore people who are buying £2400+ of GPU hardware, which will be like 0.0001% of their market.

The Radeon VII doesn't support multi-GPU and I think we can expect none of AMD or NVidia's next gen mainstream cards to support it as it's generally being deprecated, the RTX2080(Cheapest GPU released in last year or so to have mGPU support) does support it but you now pretty much always get more of a gain going to a 2080Ti instead which costs less, so you basically need to be buying two 2080Tis/Titans for it to be worthwhile atm.

I think both companies will stop releasing new multi-GPU profiles for their drivers this year and kill off traditional AFR for good until we get more mature DX12 libraries for SFR or similar for the few dedicated dev teams or just skip to unified modular architectures.

DICE have done a lot for pushing the envelope, but I don't think they've ever rolled out technology that wouldn't eventually be beneficial to consoles, the Frostbite engines shares a lot for such a well optimised cross platform engine & part of the reason it's good on PC is because it was built to squeeze the most out of the performance limited consoles. We can be fairly sure DXR and DML style techniques(Or them exactly on Xbone) are coming to next gen consoles in Navi, so it made sense they were first to DXR/RTX and got a healthy amount of time to optimise their stack for the future, just as they were the first to low-level APIs, with AFR mGPU that's more of a dying piece of tech than a progressive one though, and there's bucket loads of much more widely useable progressive techniques they can spend their time on.Quote

Warchild
Quote:
Surprised me even more given that they switched from SLI to NVlink. What was the point if "SLI" is neglected by all Devs now...Quote
Reply